Westmeath pushed but never in danger against Wexford 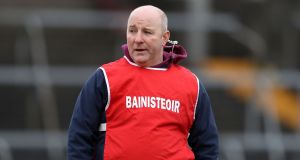 Westmeath manager Colin Kelly says his side can still have a say in the Division Three promotion race after their win over Wexford. Photo: Tommy Dickson/Inpho

Westmeath manager Colin Kelly believes his side can still have a say in the promotion race after they emerged with a comfortable victory over Wexford in their Division Three game played at Innovate Wexford Park on Sunday afternoon.

Recording their second victory from three games, their eventual winning margin would have been far greater but for the concession of late goal, but even more damning was the fact they kicked a total of 18 wides during the course of the 70 minutes. But it was still a firm thumping from the midlanders who controlled this game right through who as the result of this victory have lifted themselves back into the promotion race.

Kelly reckons the victory will be a boost to the sides confidence. “It’s confidence this side needs, and this victory should help bring that,” he said. “We wont get carried away with the victory, but the two points will benefit us for the remaining games. Our movement of the ball was quite good but we would have to be disappointed with our finishing. Eighteen wides is something we can ill-afford in tigther games, while we took our foot off the pedal in the closing minutes and conceded the goal. Still we’ll be happy to take home the points.”

The home side scored first through Ben Brosnan but once the visitors responded with three successive points through Kieran Martin, John Heslin and Kieran Martin to lead 0-3 to 0-1 after 13 minutes playing into the breeze, they went on to control most of the possession although Wexford did respond through Paul Curtis and Brosnan, but it was Westmeath who led 0-6 to 0-4 at the interval.

After Heslin and Brosnan had exchanged opening points on the resumption, it was a Heslin-inspired Westmeath who went on to lead 0-13 to 0-8 entering the closing 12 minutes. But it was the Lake County who maintained control moving into a 0-16 to 0-10 lead, before Tiernan Rossiter pulled a goal back three minutes into additional time.

1 LeBron James among those to slam Drew Brees’ anthem comments
2 GAA players spend just 2.5 seconds within 2m of each other during play
3 How a GAA club sprang up in east Belfast over Sunday breakfast
4 Eoin Murchan on being the wrong player in the right place at the right time
5 Connacht continue player hunt as six academy graduates promoted
Real news has value SUBSCRIBE