GAA weekend that was: Galway and Mayo keep it wild out West 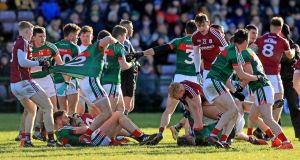 Tempers flare in the closing stages of the Allianz Football League Division One game between Galway and Mayo at Pearse Stadium. Photograph: Donall Farmer/Inpho

The increasingly evident friction between Mayo and Galway came to the fore again on Sunday with an on-field melee and three red cards in the closing stages.

Keith Duggan wrote about the rivalry on these pages at the weekend and of the various contributors, the most prescient came from Jim Carney, the Sage of Tuam, who said that after the 2013 championship meeting between the counties he had detected a change of mood in the ancient rivalry.

“It was just different. I do think a bit of badness has crept in,” he said.

That edge was most graphically demonstrated in the 65th minute when an estimated two-plus players got involved in a melee. Whereas the outbreak of disorder was charitably ascribed by some to the claustrophobic state of relations between the counties, to others it was more a sign of the indiscipline that has become a feature of matches between the sides.

Galway manager Kevin Walsh was dismissive of the incidents when questioned afterwards at the media conference.

“I haven’t a lot to say on it other than we don’t like to see too much of that going on. I’m still very conscious that every player who gets to wear a county jersey is going to fight for his jersey. Look, whatever happened, when the handbags started, you saw a lot more than me,” said the six-foot-three former centrefielder, who was on the sideline.

His Mayo counterpart Stephen Rochford was more concerned. “That was probably borne out of frustration more than anything else. We lost our discipline and that’s something we have to look at.”

Galway and Mayo have played three times in the past eight months: a full set of championship, FBD league and AFL. During those matches, seven red cards have been shown.

Keith Higgins’s strike on Damien Comer minutes before half-time in last June’s Connacht semi-final was widely seen as a major turning point, reducing Mayo to 14 men in a match they ended up losing by a point.

In January, Galway made a successful raid on Castlebar in the FBD despite finishing with 12 players, shedding Comer on a straight red and Seán Mulkerrin and Seán Aindí Ó Ceallaigh to yellow-black card combinations – all in the final 15 minutes.

Sunday’s dismissals were all in the wake of – and probably inspired by – the melee: Paul Conroy picking up a second yellow, as Diarmuid O’Connor did a couple of minutes later, whereas the latter’s brother Cillian received a straight red for a strike on Eoghan Kerin.

They meet for a fourth time within a year next May in the Connacht quarter-final in Castlebar. We’ve all been warned.

It was greatly to the GAA’s misfortune that on a weekend where snow flurried all over the north-west, counties as far south as Offaly and Kerry had been drawn to play away league fixtures in Derry and Monaghan.

In both cases the travelling counties opted to stay overnight on Saturday and so were already effectively on location when their matches were called off on Sunday morning. Anyone travelling north to Inniskeen for the Monaghan-Kerry match would have been struck by the brilliant, sunny weather all the way to Dundalk but the 10 miles from there became a more challenging micro-climate, as skies darkened and snow fell.

“We travelled the night before and stayed outside Dundalk,” Kerry chair Tim Murphy told The Irish Times. “It was Sunday morning when the call was made to postpone the match. From our perspective, in the event of bad weather we felt there should have been a Plan B. When we were heading back south, the weather was fine in Louth, Meath and Dublin.”

Kerry players gathered at Adare in Limerick on Saturday to travel north and were back there on Sunday at around tea-time.

He is confident that the GAA will reimburse the county with the costs.

“You’re talking about travel, hotels and food – something in the region of €6,000 or €7,000. To be fair we’ll probably get that back. This was unfortunate and you can’t control the weather but in future there should be some sort of contingency.

“It’s not just players and officials but because of the distance, supporters had left very early on the Sunday – we had about two buses and around 120 people – and most were already in Inniskeen by the time the game got called off.”

The GAA had announced on Sunday morning that Cavan-Meath (for the second time in 24 hours) and Sligo-Fermanagh had been called off but that there would be 11 o’clock pitch inspections in Inniskeen, Ennis and Roscommon. The latter two went ahead but the Monaghan-Kerry fixture was called off.

Derry-Offaly passed an early morning inspection but was called off at 12.30.

The GAA’s Central Competitions Control Committee has refixed all four games for next Sunday afternoon, with the O'Byrne Cup final between Meath and Westmeath now taking place on Sunday, March 11th.

Galway’s form in Division One sees them joint-top of the table with Dublin – both three-from-three – although Kerry can re-join them if they win the postponed match against Monaghan.

For the Connacht side, their latest win over Mayo comes with its own rewards and among them is the strong likelihood that they have secured their place in the top division for another year.

Since the league re-structured to a four-division, hierarchical format 10 years ago, only one team has been relegated with six points – Cork in 2016.

Going back even further, there is the misfortunate example of Monaghan, who in the 1998-99 season (pre-calendar year season) who went down on seven points but neither they nor the five other teams in the past 30 years, who have been relegated from Division One on six points – Cork 2016, Meath 2006 and ’04, Roscommon in 2003 and Monaghan 1989 – won their first three fixtures of the season.

The Irish Times shutdown sports quiz: Part one 16:15
Rafa Nadal says he would not travel to US Open in present circumstances 16:33
Premier League to allow five substitutions per team when games resume 14:34
‘Why do you need the money now?’: Schalke apologise for ticket refund questions 13:50
Shane Long signs new two-year deal with Southampton 12:46
Crossword Get access to over 6,000 interactive crosswords