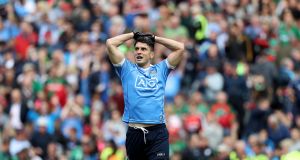 Surgery would rule out Bernard Brogan for the reason of the season: given he turns 34 in April, it would also likely bring the curtain down on his stellar intercounty career. Photograph: Inpho

The Dublin football management are exploring the medical options in order to keep alive some hope that Bernard Brogan may yet play a part in this summer’s championship.

The 2010 footballer of the year and five-time All-Ireland winner suffered a knee injury during training late last week, and it’s understood he has sustained a torn cruciate in the process. Brogan has been undergoing assessment from Dr Ray Moran at the Santry Sports Clinic, although it’s not yet clear what course of medical treatment will be taken.

Surgery would rule out Brogan for the reason of the season: given he turns 34 in April, it would also likely bring the curtain down on his stellar intercounty career which as well as his five All-Ireland titles saw him win 11 Leinster titles, four league titles, plus four All Star awards.

Brogan was named to start last Saturday’s third round of the Allianz Football League against Donegal at Croke Park, having also started in the opening round win over Kildare.

There was, however, a late replacement prior to throw-in with Paddy Andrews starting at corner forward instead, while Paddy Small also appeared later on wearing the number 15 short originally meant for Brogan.

Other players have tried this in the past, including Armagh football Kieran McGeeney Kilkenny hurler Henry Shefflin. In Shefflin’s case, it did buy him some time ahead of the 2010 All-Ireland final, which Kilkenny subsequently lost, although the knee broke down during that game and he later required surgery.

Brogan has sustained a cruciate tear before, as a 20 year-old, prior to first joining the Dublin senior panel in 2006. He made his senior debut a year later, and has since made 58 championship appearances, including five last summer even as he found himself being mostly used as an impact substitute. Brogan also contributed nine points over the course of those five games.

Leona Maguire left playing waiting game 21:52
Barcelona and Bayern battle for right to take on nouveau riche 20:44
Caldwell makes himself at home at Celtic Manor 20:32
Anderson swings back into form against Pakistan 19:52
Selby strikes back against O’Sullivan 18:44
Crossword Get access to over 6,000 interactive crosswords