Limerick see off Waterford to win first league title since 1997 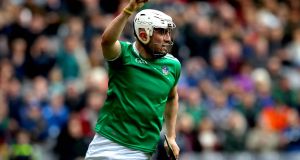 This special treaty remains perfectly intact. And between the beauty and pain which comes after every final one thing is now certain: Limerick are the best hurling team in the land, and it’s beginning to feel like there is no stopping them.

After ending 45 years of pain without an All-Ireland, they ended 22 years without an Allianz Hurling League with a similar sense of destiny – both titles now sitting neatly alongside each other within the space of just over seven months. With so much youthful enthusiasm and fearlessness on their side that must feel ominous for all their rivals.

That they kept Waterford at bay throughout the gently exciting contest to win by eight points in the end, without once being properly stretched, won’t go unnoticed either. The championship won’t be long coming around and no team looks better equipped for it right now than Limerick do. Can they go back-to-back?

The question which has so far followed them this season was whether they could even begin to follow their heights of 2018. Hurling league finals and indeed seasons have been the graveyard of many All-Ireland hurling champions. Outside of Kilkenny, who managed in four times in recent years, it’s been 30 years since Galway were the last team to win a league title immediately after the All-Ireland, back in 1989.

“There was always going to be that question,” Limerick manager John Kiely conceded afterwards, “how the group as a whole, how individuals, would cope with what happened last year.

Waterford may have felt like they were in some sort of bonus territory, having come into 2019 with little pressure under new manager Páraic Fanning, only this now represents a third successive final loss in Croke Park, after the 2017 All-Ireland final (to Galway), and the 2016 league final (to Clare). The pain of this defeat may not last long and indeed for Fanning there wasn’t any deep sense of loss.

“We finished second best team in the league,” was Fanning’s worthy spin on it, this possibly their least impressive performance of recent weeks. After beating Galway twice in three weeks, for example, with spirits soaring, they looked a little more subdued here, struggling in particular to turn the likes of Austin Gleeson, Shane Bennett and Peter Hogan into consistently scored options. Instead all but eight of their points came from frees.

No such worries for Limerick, their only concern being the frequently over-shooting, which saw them finish with 16 wides. Still Aaron Gillane was like a dripping tap, the source of constant irritation to the Waterford defence, hitting 1-9, four from frees, before being called ashore six minutes before the end of normal time. With that Gillane brought his overall league tally to 2-45; he did send nine balls wide, a deserved man-of-the-match no less.

Others pressed him hard for that bonus prize, Cian Lynch continuing his spiritual and physical leadership role around midfield, adding a point in either half for good measure. With Peter Casey lurching around full forward, captain Declan Hannon orchestrating the defence, and Tom Morrissey and Gearoid Hegarty repeatedly positioned to either provide or convert a score, there was never any doubt Limerick had the greater range on Waterford, always feeling as if they’d a little more in reserve too.

Confidence is now central to Limerick’s game, Kiely always intent to keep his team unrelenting into the new season, as if to extinguish any last element of hype from 2018; now beaten just once in the 12 matches since embarking on last year’s All-Ireland campaign, that consistency will not be easily undone.

Here Limerick were chasing league title number 12, 22 years since their last, that won in what feels like another time and another place, against Galway, played in November 1997. A first ever league final between these counties, it soon had Limerick’s name written all over it.

The All-Ireland champions accelerated straight off the grid, hitting Waterford with eight points to two in the opening 15 minutes, Gillane fast pointing the way, Hegarty and Darragh O’Donovan’s sideline also getting them in on the scoring act.

Slowly applying their more freewheeling style under new coach Fanning, Waterford gradually got themselves back in touch, Stephen Bennett’s free-taking helping to bring them back to one, 0-9 to 0-8, 26 minutes in. Shane Bennett did have one up-close shot saved by Nickie Quaid, Waterford’s game still a little too predictable; they clearly needed more than just the Bennett brothers to win this.

Then out of the proverbial nowhere Limerick hit back where it hurts, Gillane deftly turning a long ball from Morrissey straight into the Waterford net, that ball coming straight from the puck-out. It may have set a 2019 record for the fastest goal from a puck-out, but it also provided the winning platform which effectively say Limerick home.

After a few more typically swift exchanges Limerick were up 1-12 to 0-10 at half time. They then out-scored Waterford four points to one in the first five minutes of the second half, at the time Waterford’s scoring threat appeared to dry up. Morrissey let slip another Limerick goal chance, and as the wide count continued on both sides, so too did Waterford’s chance to staging a late comeback.

Michael ‘Brick’ Walsh was replaced at half time by Jack Prendergast in an effort to change their dynamic a little, only not enough to get Gleeson onto more ball, Jamie Barron also struggling a little with Limerick’s pace and athleticism around midfield.

Late on Quaid made another fine save close up from Jack Prendergast, but by then Waterford, chasing only a fourth ever league title, the most recent in 2015, had bowed once again to the best hurling team in the land.

1 Sideline Cut: Vignette shows why Bird is the true shark in The Last Dance
2 Niyi Adeolokun and Tom McCartney among Connacht departures
3 Brendan Rodgers says he was ‘really knocked’ by coronavirus
4 Anfield and Cheltenham show sports again lacking in looking after their own
5 Farrell and O’Connell provide insight into changes in Ireland’s analysis
Real news has value SUBSCRIBE