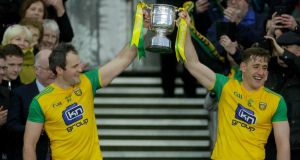 After 20 minutes or so of the Allianz League Division 2 final, the thought lingered that we might just have a semi-competitive Leinster championship after all.

Meath, fresh from being promoted back to Division 1, tore a strong Donegal side asunder initially and led by eight points.

The pace, creativity and sheer quality of their play in that period was as intoxicating as it was surprising, yet by full-time the status quo had been well and truly restored.

Meath, we learned, still have plenty of improving to do and Donegal, we suspect, might just be the dark horse that actually gives Dublin a real run for their money.

With teenage sensation Oisin Gallen excellent again and Michael Murphy in the form of his career alongside goalpoacher Jamie Brennan, they have a serious forward line that Patrick McBrearty will shortly return to following injury.

He’s correct, of course, because any team that falls 1-6 to 0-1 down, regardless of how impressive their fightback was, has some kinks to iron out.

“We didn’t come out of the blocks to be quite honest in the opening quarter,” said Bonner. “We lacked real intensity and energy. Meath came out and punished us. They were causing us problems all over the park. Cillian O’Sullivan and Mickey Newman were causing huge problems but I felt we got to grips with that just before half-time. I thought the second-half performance was excellent.

“We want to play an expansive game but we also need to get cover and we weren’t getting it initially. Once we got that sorted out we started to get control of the game and in the second half I felt we just bossed the game. I felt some of our score-taking was top class.”

When Thomas O’Reilly netted for Meath in the 11th minute, it was impossible not to be struck by Donegal’s defending. They’d left a two-on-two at the back and when full-forward Newman won primary possession he easily worked a move that released Barry Dardis to play in O’Reilly. In previous years, Donegal would have had perhaps half a dozen defenders in that space.

Bonner responded by taking off full-back Brendan McCole and bringing on veteran Neil McGee. Allied to a general improvement, they soon got on top in the game.

Meath still led 1-10 to 0-8 at half-time but managed just one point from play in the second half as Donegal ate into the deficit. Gallen was powerful and dynamic and mentally strong enough to bounce back from three first-half wides and still shoot 0-4.

Murphy, seven since he lifted the Sam Maguire Cup in 2012, shows no signs of slowing down. The 29-year-old oozed class and quality, scoring seven points, and playing the final pass for Brennan’s 58th-minute goal that put resurgent Donegal ahead for the first time.

“He’s just a real leader,” said Bonner. “He brings so much to the group in terms of that leadership quality, his experience. I thought his second-half performance was outstanding.”

Unfortunately for Meath, they have been here before, cursing their inability to hold on to a sizeable lead. Donegal came from four down to win in Ballybofey in February.

“Our goal at the start of the year was to get promotion but nobody likes coming up to Croke Park and coming out the wrong side of a result,” said Meath manager Andy McEntee. “We’re certainly hurting a bit, yeah. Promotion was definitely top of the agenda but we needed then to come to Croke Park and find out could we perform. And we did perform for large parts. But in the end we weren’t strong enough to finish the game off.”

Ghaiyyath retired to stand as a stallion at Kildangan Stud 17:28
Masks, loads of parking and no people: Covering GAA in a pandemic 17:24
Wexford GAA say some clubs ‘let association down’ with social activities 16:37
O’Brien well set to land a 10th Vertem Futurity 16:09
IRFU will charter plane for women’s team to France 16:11