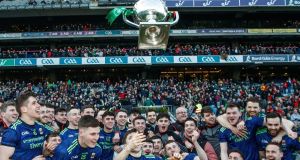 Mayo’s Fergal Boland celebrates by throwing the trophy in the air after the victory over Kerry in the Allianz Football League Division 1 Final at Croke Park. Photograph: James Crombie/Inpho

Mayo’s faithful enjoyed a sneak preview of paradise on a bitterly cold afternoon in Croke Park as their unvanquishable bunch stormed to a league title. Mayo are back in vogue.

It made for strange scenes: a national football final with a happy outcome, the green and red flags flying and the faces of so many epic occasions – Higgins, Moran, O’Shea, Boyle – wreathed in smiles.

“Only the league” and all that but because of the way that this gripping final unfolded, it became vital for Mayo that they saw the game out. When Diarmuid O’Connor capped a towering performance with a goal from nothing to give Mayo a 2-11 to 2-8 lead in the 67th minute, it created a scenario that has haunted Mayo – team and county.

Could they close it out?

Would they find a new way not to close out a national final?

It was less a question of their football calibre and more an issue of fate and faith. Of course, there were moments of high anxiety in the mad finale. Mayo won’t get away with sky-ing late balls into the air if they find themselves back in a September showpiece.

And but for an insane reflex save from Rob Hennelly on David Clifford’s point-blank flick on goal, then the psychoanalysts would be working overtime to explain the ‘why’ of Mayo on these days. But: the goal was saved. Mayo survived. And then Andy Moran, the evergreen, saw Cian Treacy all alone in Kerry’s backyard and floated a sublime through ball. The Ballina man had enough time on the ball to consider his options and his decision – a low, coolly struck goal – was both brave and correct.

Maybe, just maybe, it will come to symbolise Mayo’s appetite for the kill. It was their first league win since the millennium was young. And it was their first time to win a national final, after nine defeats, since that day in 2001.

“I think it’s big,” allowed James Horan afterwards as the sound of cheering bounced down the corridors in Croke Park.

“I think that game, if we were as effective as we should be, we could have won that by 10 or 12 points. We just about got over the line. I’m sure a bit of nerves and that kind of stuff came into it. But to win one: it is significant for that group. There is no question about that. It might be a springboard if we use it correctly.”

Kerry’s two first-half goals will provide plenty of material for Mayo’s video analysts to present to management over the coming weeks. Gavin Crowley’s finish was cool and accurate and he kept his poise to cut the ball through three blue shirts and Hennelly for a memorable goal. But you don’t associate Mayo defence with that kind of stand-back-and-admire-the-other-crowd form.

The second goal, though, was pure Kerry pace and derring-do: they swept the field in three crisp passes, with Dara Moynihan playing Stephen O’Brien through on goal with a flat, weighted pass. The finish was unstoppable and Kerry looked young and in a hurry right then.

Earlier, Limerick’s hurlers continued to streak across the sky, unencumbered by the weight of wearing any crown. The All-Ireland champions haven’t looked back since their splendid summer and duly added the county’s 12th national league title to last September’s hurling title.

They have added the authority of being champions to the relentless work rate and eye-catching ball craft that has set them apart and left Waterford just about hanging around a final in which they controlled.

Aaron Gillane warded off the March chills by firing 1-9, all but 0-4 from play, and was kicking himself for misfiring on three consecutive attempts with an hour played.

He’ll remember the goal, though: a magician’s touch on a ball driven in by Tom Morrissey. Crowd-pleasing as their attack is, it’s Limerick support play and the composure of Darragh O’Donovan, Declan Hannon and Mike Casey that gave them their platform.

A sturdy save by Nickie Quaid on Jack Prendergast’s close-range attempt killed Waterford’s chance of a late surge. It was a day when John Kiely’s team had too much youth, too much fire and too many options. The big intrigue will be in observing how they manage this potency as they prepare for the Munster theatres and beyond.

“It’s like Rory McIlroy in golf: how long has he been waiting for that next Major, that he can’t get?” said Kiely of the new Limerick mentality.

“You have to hunt it down every chance you get and for these guys the next Munster championship is the next one to hunt down, to seize the moment when it comes. There has to be a seed somewhere inside you and you have an endpoint you want to get to.”

That’s the seed that Mayo have been – and still are – searching for. There were flashes of brilliance here – Aidan O’Shea’s inch-perfect delivery to young James Carr; O’Connor’s two thunderbolt points. They weren’t disguising their happiness from the crowd of 44, 257 when it finished 3-11 to 2-10: they weren’t afraid to give a lap of honour. Try telling Tom Parsons, who had to dodge a stadium official to congratulate his team-mates that the league doesn’t matter. They’ve watered the Croke Park field with enough tears.

“I am not trying to play it down,” said Horan. “We are absolutely delighted to win a national final – there are some guys out there who have given 15 years to try and win something significant. I am absolutely delighted for them – Tom Parsons jumped the fence there at the end and Ger Caff’ and some of these guys that have soldiered for a long time.

“What is refreshing too is that we used 35 or 36 players so it was a huge panel effort. That makes it a little more special. You know, Fionn McDonagh’s 1-2 against Tyrone probably propelled us and got us off to a great start that eventually got us here.”

Here, then: Croke Park, a house that need not always end in tears. A flicker of a smile across Horan’s face when asked how Mayo’s supporters are supposed to ‘feel’ about this.

“Happy would be fine.”

1 Ireland boss Stephen Kenny: ‘I’ll do things my own way. Put it that way’
2 Andrew Conway diary: Nailing the wheelie bin challenge on the double
3 Masters Meltdowns: How even Major winners wilt under Augusta’s intense spotlight
4 My favourite sporting moment: When Ireland rocked Kingston and rolled Pakistan
5 Damian Browne: To the ends of the Earth in search of the ‘savage warrior spirit’
Real news has value SUBSCRIBE