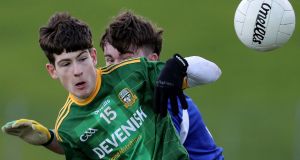 Offaly are within an hour of a first Electric Ireland Leinster MFC title since 1989 after hitting Kildare hard and early in Newbridge.

First-half goals from Cathal Ryan and Keith O’Neill helped the Faithful secure a memorable 2-10 to 2-7 win and their first provincial final place in a decade.

Meath similarly used early goals as their battering ram to a 2-10 to 1-7 win over Laois and will meet Offaly in the January 3rd final.

Kildare, the holders, were shocked by the ferocity of Offaly’s early play and the visitors led by 2-6 to 0-2 approaching half-time.

Ryan fisted to the net in the 23rd minute and O’Neill raised another green flag five minutes later following a strong run and powerful finish.

Kildare gave themselves hope with an Oisín O’Sullivan goal and an Adam Fanning point before the break but Offaly still led 2-6 to 1-3.

The Lilywhites continued to press hard in the second-half and particularly in the third quarter with a second goal from O’Sullivan in stoppage time leaving just three in it.

Offaly held on though with late scores from Jamie Guing and Pauric Robbins proving crucial.

Meath, chasing a 12th title and their second in three seasons, will go into the final as favourites following wins over Dublin, Westmeath and now Laois.

Liam Stafford and Alan Bowden netted for the Royals in the 21st and 28th minutes to leave John McCarthy’s side 2-6 to 0-5 up at half-time.

The hosts, who have played all three of their games so far in Navan, stretched the lead to nine points at the three quarter stage.

A 46th minute Laois goal gave them some hope but neither side scored again as Meath secured a comfortable six-point win.