Sideline Cut: Mayo will be a county of a hundred thousand vigils come 5pm 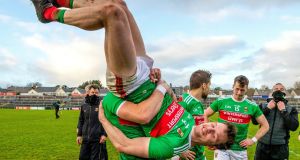 Mayo’s Matthew Ruane celebrates with Jordan Flynn after the win over Galway in the Connacht SFC Final. Photograph: James Crombie/Inpho

In November 1984, a collection of minor England pop royalty hit the ski slopes of Saas Fee to make a music video. ‘Last Christmas’ was officially a Wham! song and included as backing singers the pop duo Pepsi and Shirlie. But it was George Michael’s creation, from the lyrics to the playing of instruments to the bass note of despair in his delivery.

As soon as the ‘shoot’ was finished, Michael headed to London to record his segment of a charity single ‘Do They Know It’s Christmas’. Famously, the Bob Geldof extravaganza kept both Wham! and ‘The Power of Love’ by Frankie Goes To Hollywood off the coveted number one spot.

‘Last Christmas’ was supposed to be a disposable pop hit but has instead stubbornly stuck around through the changing decades and is now a museum piece classic, burnished by time while remaining curiously timeless and weighted with millions of associated memories.

Nineteen eighty four was also the year that Mayo began to reawaken as a football entity, storming into Kevin Heffernan’s Dublin the following August and threatening to return to their first All-Ireland football final since 1951. They didn’t make it but Mayo football has never gone away since then either. And you can be sure that the airwaves will be filled with both the sounds of ‘Last Christmas’ and Mayo football on this December Saturday morning.

Nobody really gives Mayo much of a prayer this evening. But if they are to win it – swirling magic, banished curses, all that malarkey – could there be a more appropriate year than this or a better setting, in the wintry choral silence of Croke Park with the Mayo faithful, both living and dead, locked within the county?

It has been a year of reckoning for the world. The GAA has navigated its way through the pandemic as well as possible. The football championship has been dominated by surface conversation by Dublin’s omnipotence and the financial imperatives and the wisdom of persisting with the century-old, romantic and deeply oppressive county versus county system.

But the real question that people are probably asking is what they want the All-Ireland football championship to be. What do we want from this pageant? And: has it become too serious?

One explanation for the force that Dublin has become lies in the culture of monastic solemnity and the pursuit of excellence that started to infiltrate the intercounty GAA scene about 20 years ago. Yes, the best of Gaelic football was always serious and always intense. But it was also a world of mischief.

The 1960s through to the mid 1990s are laden with tales, mostly unprintable, of players skiving off after league games, of breaking curfew, of post All-Ireland bacchanals: of getting away with it, of grabbing life and necking it straight from the bottle. The behaviour mirrored Irish society at the time.

When teams from the 1970s and 80s and 90s meet for reunions, the bar remains their port of call, the session their refuge. You have to wonder if the teams of today will, in 25 years’ time, have for their reunion a triathlon weekend somewhere sunny followed by a sit down in a juice bar.

Habits change. A generation of players, arguably starting with Kieran McGeeney’s Armagh, came along and demanded a culture of totalitarianism from everyone in the group. The remarkable thing about the Dubs is that they have allowed no distraction in six full years. They win. They celebrate modestly. They succeed again, succeed better.

One of the old GAA certainties is that the ‘if Mayo ever won the All-Ireland’ the county would couldn’t handle the extremes of emotion. One Mayo friend has told me that the thought genuinely frightens him. When Mayo feature in normal All-Ireland weekends, it always feels like a transatlantic affair – Mayoites speak of Chicago and Cleveland as though they are mere adjuncts of Bohola. Such-and-such lands home for the weekend and in New York, half of the south Bronx piles into Eugene Rooney’s bar on 6th and 54th, from where they Whats App friends in Croke Park. Not this year. On Saturday, in Mayo, everyone will be in their homes: the county of a hundred thousand vigils.

It’s unique and will surely never happen again. And if the impossible happens, none of the predicted scenes will come to pass. If Mayo win the All-Ireland football championship of 2020, they will do so in darkness. They will do so in the bleak midwinter. There will be no storming of the field by Mayo supporters who have waited all of their lives for this. Nor will there be a symbolic returning home with the Sam Maguire. There will be no descent into overjoyed madness, no barnstorming tour of the county.

Instead, Mayo would get to experience something much more rare and valuable. They’d actually have time to allow the story of the last 69 years to breathe. More than any other GAA county, Mayo’s football supporters have been soldered to their teams, existing as a vast Greek chorus to witness every turn of brilliance and heartache.

The task of beating Dublin has arguably never been tougher than it will be this evening. But Mayo have never been bothered by that. And if some element of dropped magic falls through the skies onto their shoulders, then it will feel right that the night is theirs and theirs alone. What could be better than the players finishing this thing to the sound of only their own screams and cheers in Croke Park – and to then head West for Christmas?