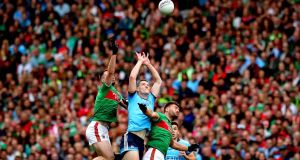 Aidan O’Shea can play a vital role in Mayo’s kick-out strategy as they look to gain an advantage against Brian Fenton and James McCarthy . Photograph: Ryan Byrne/Inpho

What do Mayo need to do? What can James Horan try? I suppose it’s a question that will be going through the minds of thousands of nervous Mayo supporters around the world this morning. That and: can Christmas come early for once?

A moment will have come where James sat down with a pen and paper and thought about what needs to happen to cause a malfunction in this Dublin machine. It’s a word that is used a lot about Dublin. But, of course, the truth is, they are only human.

So for me the most important thing about Mayo’s game plan is pressure. How many different ways can they create pressure situations on Dublin?

The first area is on Dublin’s kick-out. The number of column inches and broadcast airtime devoted to Stephen Cluxton is vast. But it is because his influence has not waned and doesn’t change. So it leaves Mayo with a clear choice. To take them on or not. I feel it is vital that Mayo take them on. That doesn’t mean you necessarily win possession off their kick-out. The chances of doing that are not great. But you would create that sense of pressure. Can you force the players who receive the ball to make decisions they wouldn’t take with less pressure? Can you force Stephen Cluxton to take his second or third option – and then make winning that ball combative and apply pressure? It has to be full-on commitment. But the athletic profile of their younger players gives me reason to believe they can challenge Dublin in this area.

The second objective is to stop Dublin getting the ball in their hand. Once they take control of the football, then they slip into possession mode. So can you apply pressure on them in open play? It is particularly hard to do this against Dublin because they are extremely well schooled. They are big and athletic and they can beat a lone tackler and simply do not want to force the ball through contact. They will lay it off to the next free man. They don’t take the risk to give defenders a chance to get at them.

So Mayo must be very organised and disciplined and work in twos and threes where possible. You decide when you go and then you trap aggressively and squeeze them towards the sideline. The Mayo forwards have a big part to play as well: their inside forward line can stop the Dublin ball carriers from freely going back out the pitch when they don’t fancy the options in front of them. Ciarán Kilkenny does this brilliantly, backpedaling to buy space and change the angle of attack. In short, they must be harassed and hurried all evening.

When Dublin attack now, they are simultaneously preparing to defend in the event of losing the ball. So if you do win the ball on your defensive 21 you are facing 13 Dublin players suddenly in defensive mode just to get downfield. So the first two or three passes out of pressure by Mayo become critical. The squeeze goes towards the ball so if they can work the ball smartly back to the middle of the field and out the weak side, the space will open up. The hand-passing needs to be sharp and slick to find a way through that pressure. That is something that Mayo have to be conscious of. But if they can do this, they could reap rewards.

Then you come to the midfield dilemma. James McCarthy and Brian Fenton are a colossal force. Conor Loftus is going to be at a physical disadvantage and I think they are going to have to supplement their midfield on David Clarke’s kick-out. So Conor Loftus goes left, Matthew Ruane centre and Aidan O’Shea goes right and you go to those two if you can’t get the short kick away. And from a running point of view, Conor has good legs and will enjoy that aspect. So he should be used as a decoy.

Mayo’s kick-out is a major issue. It could unravel for them and I see Dublin zeroing in on that. If the kick-out does collapse then Mayo are in trouble. It is vital they get the ball in their hands on their kick-outs.

And having studied Mayo they usually start well but the longer it goes on, it tends to dissipate. For me, it is just about process. And one of Dublin’s best strengths is their ability to work you out. If you get joy from one strategy, they will figure it out and close it down. So you need another plan.

In the event of a collapse, I think a protectionist kick-out could work best for Mayo rather than precision, short- or mid-range. You kick the ball over the top of your own six defenders and you drop your midfielder into that pack so that you have seven players where the ball is going to break and your half forwards coming the other way and it becomes a chase for the breaking ball. And even if you don’t win them all, you still have bodies behind the ball to slow down Dublin’s transition. It gives Mayo an out if they are getting murdered on short to medium kick-outs. It is a good go-to in a bad situation– and that bad situation will probably materialise at some stage.

And that complements the overall pressure game you are trying to apply on Dublin. Even if you don’t win the ball, you have your biggest players competing for the ball – and you will win some of those. And Dublin will match that. They will commit men to that break. So suddenly, you are dictating Dublin’s structure.

And therefore, they can’t be set up in those few seconds. And if and when Mayo get the ball, the opportunity to get their transition running game going will present itself. That’s when the fun could start.

All of this is predicated on Mayo’s determination to drag Dublin into the trenches: to psychologically ruffle them and create as many dynamics and as much mayhem as possible. They have a lot of pace in the backline, highly effective aerobic runners in Loftus at 9, O’Connor at 12 and Kevin McLoughlin at 10 in that midfield triangle. The option of the long ball into Aidan O’Shea is there and I would play Tommy Conroy close to him because he is so sharp and heads-up and is a true finisher.

Dublin have been the hardest hitting and, in my opinion, the most defensive team in the championship. They have a man to man/totally zonal system with a serious emphasis on covering space. Their awareness of covering space is excellent. Watch how often their full forwards drop back into their own half.

Dublin’s intensity and work rate and turnovers is superior to those of their challengers. It should be the other way. It must be if you are to live with them. And thus we are back to pressure. I believe if Mayo can tick all these pressure boxes, then they do have a realistic chance of becoming All-Ireland champions.