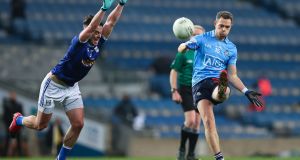 Most successful people will tell you that in sport as in life they’re often more driven by the lows than the highs, remember the misses more than the hits, and Dean Rock is no exception.

On Saturday evening, Rock will seek to win his seventh All-Ireland title with Dublin, this year already marked by him becoming the county’s highest scorer in football history, further surpassing his father Barney in the process. His near perfect winning record also includes eight Leinster titles, five league titles, and two All Stars, and still Rock can readily recall the exact moment that inspired it all, that still lingering low-point of his career.

After winning an All-Ireland under-21 with Dublin in 2010, Rock was first called into the senior panel by Pat Gilroy in 2012, making a couple of early league appearances. What happened next ultimately drove him to becoming the player he is today.

“There would have been times when you really doubted yourself,” says Rock, appearing impeccably fit and lean in Parnell Park, days before Dublin’s latest final showdown against Mayo.

“I can remember getting dropped off the Dublin panel in 2012. It was the night Chelsea were playing Bayern Munich in the Champions League final, and I got a phone call from Pat Gilroy saying I was dropped. I probably thought at the time I was getting the call to say I was playing against Wexford in the championship

“It just transpired that for whatever reason, I wasn’t deemed good enough, at the time. I remember the next day going down to Garristown, where I live, running and running for hours until my dad had to come down and pick me up. So I think it was just that resilience piece, that you need as a sportsperson. You’re going to have your setbacks. I certainly had them and I could easily have packed it in and walked away.

“But I made a promise to myself that I was going to do what I could. Luckily enough the club [Ballymun Kickhams] came to the rescue for me that year. We won the club championship and that set me up for when Jim [Gavin] came in, in 2013. I suppose from there, I never looked back.”

His first final appearance was in the 2013 win over Mayo, replacing his close friend Ciarán Kilkenny, and Rock’s own resilience, he says, is reflected in plenty more players on the Dublin panel, some driven by own low points more than others.

“Most guys on the Dublin panel would have had to overcome their own personal adversities. You look at Robbie McDaid now, he’s probably had the same journey as myself, he’s probably been dropped off the Dublin panel numerous times but that perseverance and resilience piece for him in particular, he stuck at it when he easily could have went, ‘Look, I’m not going to make it with the Dublin senior team’ and he’s flourishing at the moment, and that’s just testament to him and to other guys as well for sticking at it in the hard times.”

That, despite all the debate around Dublin’s dominance, is something money can’t buy: “And look, when it comes to experience in the latter stages of championships and All-Ireland finals in particular we’ve only won a lot of those games by points and after replays, we’ve been very lucky to get over the line on numerous occasions. Games have been really tight and have been decided by one or two decisive plays in those moments.”

The pandemic-struck season, Rock suggests, may well have given Dublin the more extended break they needed after their five-in-a-row, although Saturday will provide the evidence of that. In the meantime he’s already marked 2020 by overtaking Jimmy Keaveney (30-402) as Dublin’s highest scorer, between league and championship, his 1-8 against Meath in the penultimate round of the league in October bringing his tally to 17-450.

“For me personally, it’s been a great year. Turning 30, winning with the club again, was obviously very satisfying. It obviously hasn’t gone unnoticed the struggles we’ve had with Ballymun over the years, in terms of getting our best players on the pitch. So to be able to train with the club lads all summer and give that a full whack was one of the most enjoyable moments in my career.

“I wouldn’t have been too aware of the record until the end of last year. Probably after the All-Ireland final, somebody said something that I overtook my dad. But it’s one of those things. You just tick it off your list and move on. I take great pride in my preparation on and off the field, think when you’re looking after yourself on and off the pitch, that transpires to good performances on it.”

It’s a marked weekend too for girlfriend Niamh McEvoy, seeking her fourth successive All-Ireland with the Dublin women’s footballers, a team also driven by their lows as much as their highs, when they face Cork on Sunday.

“The thing is, we’ve great experience of it over the last number of years. Obviously we would talk about it quite a lot because it’s at the forefront of your mind. But we have our own routines away from football. But look, lucky enough for us, it’s been part and parcel of our lives.”