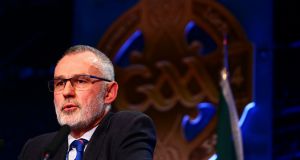 New York’s Larry McCarthy pulled off an historic victory to become president-elect of the GAA on Friday night at annual congress, held this year in Croke Park. He takes up office in 12 months’ time and becomes the first overseas candidate to win the office in the association’s 136 years.

Afterwards, he thanked his opponents for their courage in putting their heads above the parapet and his family, wife Barbara and sons Conor and Shane, as well as the Sligo club in New York for nominating him.

Reminding delegates of Dublin’s 2011 All-Ireland winning captain, Brian Cullen’s peroration on the Hogan Stand, “see yiz in Copper’s”, he said that whereas he wouldn’t be in that establishment in his life, “I’d like to see everyone in Ned’s on McLean Avenue in the Bronx”.

From another large election field - as was the case three years ago there were five candidates running - 65-year-old McCarthy defied the consensus that he was an outsider to emerge as the choice of this year’s delegates, getting elected on the final count, 10 clear of runner-up Jarlath Burns, 132-122.

The total valid poll was 276. Burns topped the poll on first count with 80 and McCarthy on 63. Former Leinster chair Jim Bolger polled strongly with 55 whereas Mick Rock and Jerry O’Sullivan finished with 40 and 38 respectively.

Burns, from Silverbridge in Armagh, had been the marginal front runner, but as the youngest candidate at 52 has time on his side to run again. The vote saw the two front runners finish less convincingly ahead of Bolger, from Clonmore and Carlow, than expected, with Mick Rock from Elphin in Roscommon, and Cork’s Jerry O’Sullivan from Cloyne further back.

Originally from Bishopstown in Cork, McCarthy has an All-Ireland club football medal with Thomond College from 1978 and having emigrated to the US, he went on to become a familiar face in New York delegations to congress.

He was elected a GAA trustee, formally a representative of congress, after a strong showing in the elections in 2018 when he topped the poll. An able campaigner, he has spent a lot of time in Ireland during the campaign and will move back here for the duration of his term.

In around 40 years away, he hasn’t lost his Cork accent. An academic in Seton Hall University in New Jersey, he was able to combine his career as an associate professor with his love for Gaelic games.

Speaking to The Irish Times during the election, he explained why he felt his candidacy would make a difference.

“I bring a different perspective in that I teach on a sports management course in a school of business and my area of expertise is sports marketing. I have the experience of studying sports organisations around the world. Personally it’s an ideal mesh, bringing together my professional and personal interests.

“I know we’re not running a business even if there are commercial aspects, but it’s a voluntary sports and cultural organisation.

“The biggest challenge for any president is balancing all of the tensions in the organisation. I identify three currently: obviously the club versus county fixtures; between colleges and schools and the under-20 football championship; and then managing the GPA and our relationship with county players.

“As these get resolved there’ll be others as it’s a constant task to manage the demands of all the stakeholders.

“Long-term challenges include the population imbalance, the soaring cost of games, but the perennial duty of the president is to ensure that most people are satisfied, acknowledging that not everyone’s going to be happy with what you do.”

McCarthy will be the 40th GAA president when he takes office in 12 months after a year as president-elect.

Meanwhile, some of the playing motions down for decision were taken on the Friday night.

Most significant was the success of Kildare’s proposal to outlaw the back pass to a goalkeeper from a player who has received the ball from a kick-out. It got through 154-93.

Tyrone’s proposal to give sideline officials the power to bring infractions to the attention of the referee was queried by former president Christy Cooney on the grounds that it could prove difficult to enforce at club matches.

Proposer Dominic McCaughey said that there was no compulsion to have sideline officials at all club fixtures. It was carried 174-76.

Limerick’s motion that teams have two challenges to decisions on validity of scores, frees, line-balls, wides, 45s and 65s was withdrawn and referred to Central Council for further consideration.

John Devanney, from Down, in replying to the annual report of director general Tom Ryan, advocated reverting from the new calendar of recent years to the traditional All-Ireland dates of September for both the hurling and football finals. Arguing that the association was losing out on the promotional benefits of having children back in school for the biggest events of the year, he concluded:

“Since the 1920s, we in Ireland have almost set our internal clock to those two Sundays in September and I believe we should think of going back to them.”

Fermanagh delegate Phil Flanagan asked that any future deals with the GPA be administered centrally because of the strain being put on volunteers.