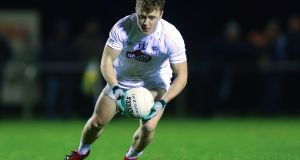 Whatever about the old proverb of a cat having nine lives, any such feline characteristics were used – time and time again – by Kildare who somehow kept themselves in this game, often by their fingertips, only to show more predatory instincts when it mattered most late on to stymie Armagh at St Conleth’s Park.

If only for their fighting spirit alone, Kildare deservedly secured an unlikely share of the spoils. From Armagh’s perspective, this was one that most definitely got away, as a five-points lead heading into the final quarter disappeared into thin air. A draw was akin to being invited to a banquet to discover only crumbs of comfort on offer.

Truth be told, Kildare learned more about themselves. The easy thing would have been to accept their lot. Their fate could have been well and truly sealed but for a number of incidents: one, where Armagh’s Jamie Clarke’s early goal was correctly blown up as he dispatched the shot to the net for taking too many steps; another where Connaire Mackin’s blistering shot rattled the crossbar. Add in seven first-half wides, and another four shots which fell short of the target, and you get the drift of how Armagh’s dominance wasn’t reflected on a half-time score that had the teams level at 0-6 apiece.

No, this was a Kildare team – already shorn of experience through suspensions and injuries – which showed fighting spirit, especially given that the talismanic Kevin Feely left the field with a nasty head injury after just six minutes. “Like a boxer’s cut,” remarked Kildare manager Cian O’Neill of Feely’s war wound after an accidental clash with Jemar Hall.

For all of Armagh’s first-half profligacy, it seemed as if they finally got their act together sufficiently to give manager Kieran McGeeney when he most wanted on his return to a once-favoured haunt. In the 50th minute, Rory Grugan supplied the pass to Stefan “Souper” Campbell and his right foot blasted the ball to the net. The home crowd had barely digested this unpalatable ingredient when a cheap free, following an off the ball foul, was conceded on the 14 metres line, leaving Niall Grimley with an easy tap-over for a point which left Armagh leading 1-10 to 0-8.

Where once many a Kildare team would have rolled over, this one showed bite of their own. Sleeves were rolled up; and, bit by bit, the deficit was reduced. New blood like Jimmy Hyland, who scored four points, and Aaron Masterson – who impressed off the bench – were to the fore for the Lilywhites , while David Slattery produced a Trojan amount of work in forfeiting his attacking guile to chase back and harry and generally be a disruptive influence .

Ben McCormack’s physicality at full forward was a useful weapon but he also showed some footballing intelligence too, and his point – the first of five in a row for Kildare –- was to kick-start the fightback. Conor Hartley, Fergal Conway (from 45 metres) and Masterson (also from beyond the 45 metres line) and, then, Hyland, belying his youth with a nerveless free, brought the game level.

Still, Armagh eventually ended a 20-minute scoring drought with a Grugan free some four minutes into injury-time after a foul on Jason Duffy. If it seemed as if Armagh had managed to finally seal the deal, it was not to be. When the ball was moved up the other end of the pitch, McCormack ran into a cluster of Armagh defenders who couldn’t resist the temptation to wrap him up. A shrill of the referee’s whistle gave Hyland the chance to level matters. He took it.

“Disappointed, we left it behind us, missed a lot of easy scores,” admitted McGeeny, “but fair play to Kildare, they came back at us, you have to give them credit for that . . . we’re very capable of holding our own [in Division Two] but you have to show it, you don’t get anything for almost or maybes as we’ve seen today.”