Jim Gavin: ‘we just asked the guys to back themselves’

James Horan: ‘they just had a very strong period that we couldn’t deal with it’ 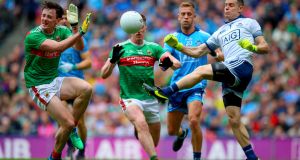 Oh mercy. If the first and the last thing it takes to beat Dublin is the utterly complete performance, this is what happens when Mayo can only deliver on half of that. Res ipsa loquitur.

So it began as a contest and finished with a complete annihilation, the end result sending Dublin into an All-Ireland final, and one last victory away from football championship history. It may take more than the complete performance to stop them now.

That Mayo were up by two points at half time, then promptly conceded 2-6 with reply inside 12 minutes, both goals from the boot of Con O’Callaghan, turned the game inside out and upside down at the same time. They could be no way back from there, and still the first and the last thing Dublin manager Jim Gavin was thinking at half-time was that anything drastic needed to change: the players, he insisted, would take care of that themselves.

There were no magical words and definitely no panic either. Gavin didn’t make a single change.

“Would you have?” Gavin asked back in half jest.

“The message to be honest was just keep doing what you’re doing,” he added, this extending an unbeaten run over Mayo in the championship going back to 2012.

“This is an All-Ireland semi-final, against an outstanding team. I think both defences were on top in the first half, some great tackling by both sides. The game naturally opens up, so we just asked the guys to back themselves, to believe in the skill sets that they have, to try to be truth to that, and that’s where those scores came from.

“And I suppose that was the learning of that first half, they showed great adaptability to the game.

“So they will see most of that is said to them. Their game intelligence is really high, we just empower them, we can’t play as a coach and management team. We just give the framework, they go out and play. This is very much a player driven team, make no mistake about that. That’s all we ever ask for. Most of our practice sessions are based around the skills of the game, and the guys showed that today.”

Still it was a very different game for most of that first half, Mayo pressing so far forward it was if they were playing on a cliff edge. Patrick Durcan was stuck so tight to Jack McCaffrey in the first half they had to be surgically separated at the break, and Dublin appeared under pressure on every side and front: they conceded 13 frees in the first 20 minutes, compared to Mayo’s five; they’d hit four wides by half time, compared to Mayo’s one.

And Dublin only managed three points from play in the first half; Mayo hit six. Dublin also went from the 14th minute until the 28th without any score at all. Still Mayo were only two scores in front on the break, 0-8 to 0-6.

Gavin reckoned Dublin were still giving as good as they got: “I thought it was nip and tuck. They’ve had a few more games, were maybe that but more battle hardened, but that’s just an excuse. Mayo are just a good team. I’d just put it down to Mayo’s class, they performed very well in those opening exchanges, and our guys adopted very well, and showed great composure.

“Semi-finals are there to be won, so grateful and thankful that we got the result. Overall we have to be satisfied with the performance, there is great learnings in each game we play, and there were certainly a lot of learnings in that game. We obviously know Mayo very well over the last number of years, understand what an outstanding team they are, and that shone through in the way we adapted to that game. We got some very good team scores, from some very good execution. The spotlight obviously shines on the player gets the scores, but I thought they were some great team moves.”

For Mayo manager James Horan that first and last question also hinged around what happened after half-time. “We started strong, defended well, built a few good scores, and I thought we were patient, did well to go in two points up, and it could have been a few more,” he said.

“But the start of the second half they were very strong, and in a short space of time, came at us very hard. Con O’Callaghan got his goal, and just before that we sent a shot into the goalkeeper’s hands, and they came down and scored from it, Lee Keegan fell, and then they won the next five or six of our kick outs, got a second goal. And it was that period obviously when they were in complete control, and we were troubling to get our hands on possession, and they were in a strong position for the rest of the game.

“They definitely pinned back their ears a little, and ran at us when they got the ball, and probably weren’t doing that as much in the first half, so they just got a step on us a couple of times for those goals, and yes they finished them very well.

“Look, a team like Dublin are always going to come at you. I suppose when we were on the ropes we didn’t deal with it well, they came at us from a lot of different angles, and really got their tails up. And it took us a while to adjust, and they were in control of the game at that stage, they just had a very strong period that we couldn’t deal with it.

“You saw in the second half when Con O’Callaghan got the ball in his hands, just going running at his man, and a couple of things happened at that stage, maybe the legs got a bit heavy, but they took full advantage at that stage.”