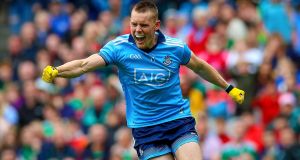 Jim Gavin has a small ritual he carries out with every Dublin player who comes off the pitch as he’s substituted. Doesn’t matter if you had a scorcher or a stinker, they won’t make it up to the subs’ seats without Gavin meeting him on the sideline with a brisk, eye-contact handshake. Every one of them is the same, almost to the point of parody.

Con O’Callaghan hobbled off to be replaced by Paddy Andrews as injury-time approached here, flanked by one if the Dublin medical team. When Gavin went over to meet him, the Dublin manager lost the run of himself completely. He gave him the handshake, same as ever. But on top of it, he patted the young gunslinger on the cheek.

And rightly so. Truth be told, it was nearly a surprised he didn’t cradle him in his arms and promise to write him into his will. The dismantling of Mayo had many drivers - a thunderous second half from Brian Fenton, a spell of watch-maker’s precision from Paul Mannion - but it was O’Callaghan who turned this from a going concern to a gone baby gone.

All it took was 11 minutes. Mayo were in it and then they were roadkill. Dublin’s five-in-a-row was looking dicey and then it was time to start printing posters. You’d call what Gavin’s side did after half-time the championship quarter except they didn’t even need the length of a quarter to do it. Championship sixth, then.

For the whole of the first half, Mayo were on an even keel with Dublin. It was like the two teams were staring each other down across the DMZ, keeping each other where they could see each other. Mayo’s two-point lead at the break was fundamentally fair and a true reflection of the game. They had done just about everything right.

Mayo’s match-ups had gone like a dream. One of the key questions in the build-up was what they were going to do with Jack McCaffrey. Time after time this summer, in game after game, teams playing Dublin have had their eyebrows singed as they watched McCaffrey sprint forward from wing-back like a thief who has just tripped the house alarm.

When you want something done, ask a busy man. Paddy Durcan always looks like he has a quick errand to do before getting the kids to school. He seems to take three steps where two might do, just to steady himself and get himself right. In the first half, he could do no wrong, erasing McCaffrey from the game through the simple expedient of giving him some defending to do.

Durcan had two points on the board by half-time and - almost as important - one brilliant dispossession from a locomotive McCaffrey in front of the Mayo goal. Throw in the fact that Seamie O’Shea was doing yeoman’s work on Fenton and Colm Boyle was having another stormer on Ciarán Kilkenny and everything Mayo were trying was coming off.

Or, almost everything. The one Dublin player who looked like he might have his own ideas about the way the game should be going was O’Callaghan. Right from his first involvement in the fourth minute, it was obvious he fancied his chances against Lee Keegan, his designated partner for the day.

He got on the ball around 20 metres from goal and if Mayo weren’t immediately thinking of his goal in the 2017 All-Ireland final then O’Callaghan was. Keegan got close to him but couldn’t affect the tackle and had to flail with a late push just as O’Callaghan dropped the ball to his toe. As a result, the shot was less pure than he’d have hoped and Mayo survived.

For the rest of the half, Mayo were able to keep the game mostly up the other end of the pitch. They were on top and playing a game that made no reference to O’Callaghan. They were safe. Until they weren’t.

O’Callaghan’s two goals, eight minutes apart, bookended the Dublin show of strength. For the first, Keegan made the bad mistake of getting too close to O’Callaghan as the pair of them chased out to the ball. It meant that when O’Callaghan made a hairpin turn with the ball, Keegan hadn’t enough room to react. In his haste to get back, his heels went from under him. O’Callaghan’s finish was deadly, giving Rob Hennelly the opened-up body as if to aim for the left-hand post and drilling it inside the right one.

Eight minutes later, Kilkenny pinged a brilliant ball into O’Callaghan 20 metres out. He did Keegan again, zipping past him like he’d spotted a free check-out in the supermarket. Bing-bang-boom, Dublin were out the gap.

Ole Gunnar Solskjaer: ‘The sky’s the limit’ for Mason Greenwood 12:07
Monica Seles: The warrior queen who could have been the best ever 11:25
Thrillingly fluent, thrillingly pointless: Man City’s riposte comes too late 08:54
World Athletics freezes out Russian athletes after $5m fine goes unpaid 08:41
European Tour lifts Olesen suspension due to court delay 08:08
Crossword Get access to over 6,000 interactive crosswords