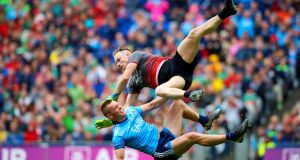 Who wants to play them now?

Who really wants to face Dublin?

In the end, there would be no dark magic or otherworldly defiance from Mayo, whose latest odyssey came to a crushing end on a spitting evening in the city.

In a display of atomic energy and devastating finishing, Dublin laid waste to Mayo and the national romance by hitting them for 2-6 without reply in just 15 minutes after half time. Relaxing in their hotel rooms, in shorts and slides, their prospective All-Ireland final opponents from Kerry and Tyrone must have suppressed a deep gulp. The prize for winning tomorrow’s match seemed somewhat dubious after this. Because what Dublin did, in the end, to a proud and hugely resilient Mayo outfit on a dank Saturday in the city was frightening.

Two goals by Con O’Callaghan in the 37th and 46th minutes of a sustained and merciless attacking front from the champions quickly put this game beyond Mayo. From the throw-in after half time, they won a free. Rock tapped it over. And then they laid siege on Rob Hennelly’s goal. Mayo could not lay a glove on the ball, with Brian Fenton hauling two brilliant fetches in succession and all avenues closed up.

Just like that, everything about Dublin was lightning sharp and forensic. Paul Mannion struck two sensational points which ratcheted up the local volume here in ‘headquarters’ and now, Mayo minds were reeling, on the field and in the stands and in the bars of Chicago and New York. There would be no magic. Not this year, not against this team and possibly, now, not for this team.

A flamboyant goal by Fenton in the 57th minute after Mayo’s resistance had begun to crumble and the return of Diarmuid Connolly to the pitch in Croke Park in the 70th minute completed another evening when Dublin have never seemed so omnipotent. They are 70 minutes away from the matchless five-in-a-row but as Mayo’s splendour faded here, it is beginning to look as if Fenton might have to go through an entire championship career without knowing what losing feels like.

The question looms larger now. Can any team live with them? The way Dublin just shook off their first half difficulties and lethargy must have deepened the suspicions of those who feel that the old contest has changed irrevocably.

At half-time, history appeared to be trembling. Apart from the individual battles, with Lee Keegan shadowing O’Callaghan and Paddy Durcan tailing Jack McCaffrey, nothing that had been spoken about materialised. This was no shootout. Instead, the latest instalment of this rivalry deepened into an austere and gripping battle.

The Met Eireann forecasters got it wrong: the anticipated summer showers never arrived. But the August tea-time was dark and breezy and wild around the edges and it all contributed to the atmosphere of something seismic happening: of Dublin’s five-in-a-row ambitions disappearing down a sink hole; of Mayo returning to that September destiny yet again, yet again.

Twenty minutes in and Jim Gavin’s famous blue notebook must have been a riot of scribbles, exclamation marks and question marks. By then, Dublin had coughed up five points and 10 fouls. Mayo had set the tone in the first five minutes. Cillian O’Connor won a free which he then converted and Seamus O’Shea exploited the first of many holes in Dublin’s rearguard to nip in and chip a point.

The Western crowd breathed a sigh of relief after that. The week long fears that the years and the long summer might have been leading to a drubbing by the champions elect eased. By half-time, Mayo’s half back duo of Colm Boyle and Durcan had hit 0-3 while the Dublin forward line had been held to 0-3 from play, with Brian Howard floating an injury time effort to add to Paul Mannion’s two scores in open play.

It was cagey from both sides. Only once did Jack McCaffrey bomb forward on one of those patented runs; when he did he was devoured by a combination of Brendan Harrison and Boyle. It was Mayo’s defensive tracking - Boyle on Ciaran Kilkenny, Stephen Coen on Niall Scully and Keegan on O’Callaghan - that caused Dublin to look hesitant and out of ideas and, at times, ordinary.

Midway through the first half, they executed a hard press on Rob Hennelly’s kick-out, hoping to bring about a visit by ghosts of All-Ireland past. The Hill crowd added to the spooky atmosphere. The focus on the Breaffy man was intense but he held his nerve, twice forced into outfield rambles with the ball as he waited for some - any - Mayo ball carrier to present himself. But as a collective, Mayo warded off the kind of calamitous sequences that have haunted them in other years. They looked comfortable and fresh and composed, with Durcan putting in another impossibly productive half of defensive diligence and attacking imagination.

The crucial difference was that at half-time, it could be said that Mayo had played exceptionally well while Dublin had not. Somewhat fabulously, they had kicked only one wide in that first half, which must rank as some sort of record for the green and red. Their decision making had been exemplary. And still they only led by two (0-8 to 0-6) against a Dublin side whom, one can presume, had not enjoyed a very flattering presentation from Gavin and his backroom team.

It worked. Invisibly, Dublin had managed to switch gears in that tunnel. While the Mayo men had returned to resume the first-half contest, Dublin were now playing a different instrument. It was predicated on a viciously aggressive attacking mindset, evidenced in Kilkenny’s direct ball to O’Callaghan, whose ankle-breaker of a turn created the space for goal.

Once the ball hit the net, whatever spell of doubt and hesitancy Mayo had created was broken. Their championship was effectively ended in the time it takes to make a cup of tea. Dublin's forwards ran riot and looke superb. Kilkenny didn't score: instead he played creator in chief.  James Horan watched on and ran his bench as planned. But it was done. What could he do?

Even a typically defiant goal by Lee Keegan - their first score of the second half - couldn’t disguise the fact that this day was turning all shades of blue. They would manage just two more scores over the course of the evening and that wide count looked more recognisable by the time they shook hands at the end.

It was a cruel close. It remains to be seen if the senior cohort of this group has anything left to give. Certainly, as they surveyed the scene afterwards - the rippling power and age profile of the Dublin players who commiserated with them, they may have reached the conclusion that the obstacle is, in any event, too great for any team to overcome any time soon.

The footballers of Tyrone and Kerry will convince themselves otherwise, of course. But it’s early August and Dublin have sauntered back to the All-Ireland final. Their grip on Sam Maguire has never looked tighter.