Patrick Campbell fires his side into final 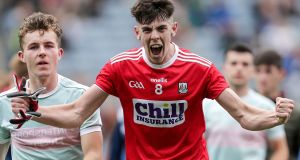 A year that began with Cork football cloaked in gloom is on the verge of ending on a remarkable high with a dream double of All-Ireland underage successes still a possibility.

Patrick Campbell fired the Cork minors through to the Electric Ireland final on September 1st with 1-2 and a man of the match display while captain Conor Corbett struck 2-3.

There was some concern for Campbell when he retired from the game in the 50th minute with a back spasm though management are hopeful he’ll be okay for the decider.

That will be against Kerry or Galway on September 1st and will be Cork’s first final since 2010 when they chase a first title since 2000.

The bigger picture is that Cork football appears to be booming again with the U-20s winning their championship and the seniors also reaching the Super 8s having frustrated their supporters by suffering relegation back in spring.

Cork led by just two points at the three quarter stage of this game but outscored the Connacht champions by 3-3 to 1-3 from there.

Cahalane had a goal chance himself in the ninth minute that Mayo defender Oisin Tunney blocked. Hugh Murphy also blasted over in the 14th minute when a goal was on.

Murphy kicked two first-half points and another from skipper Corbett in the 24th minute left Cork 1-7 to 0-4 up.

Mayo finished the half stronger, though, and three points in a row, two from the excellent Paddy Heneghan, left them just 1-7 to 0-7 down.

They got the margin back to two points on several stages in the third quarter but were unable to prevent Cork pulling away with three more goals.

Defender Daniel Linehan surged forward for the decisive second and Corbett added two more in the run in, in the 50th and 65th minutes, as the Munster finalists flexed their muscle in impressive fashion.

1 Monica Seles: The warrior queen who could have been the best ever
2 Martina Navratilova: A leader in her time, and for ours
3 Séamus Power rockets into share of clubhouse lead in Detroit
4 Red Bull poised to protest over Mercedes’ new steering system
5 GAA will take action against intercounty teams returning to training early
Real news has value SUBSCRIBE