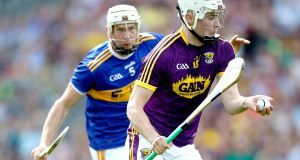 Rory O’Connor in action against Tipperary in the All-Ireland semi-final. “We slowly started pucking the balls down on top of the Tipp lads, making nearly All-Stars out of them.” Photograph: James Crombie/Inpho

It’s a throwaway remark that Rory O’Connor doesn’t mean to sound quite so cutting though the timing of it, a few days after the All-Stars, is too fitting to ignore.

The young Wexford forward is reflecting on their All-Ireland semi-final defeat to Tipperary, when they went from a position of strength – five points up, a man up – to a position of desolation in double quick time, finally losing by two.

“I don’t know how we done it or what happened, it just felt like in two minutes on the pitch we slowly started pucking the balls down on top of the Tipp lads, making nearly All-Stars out of them,” recalled O’Connor.

In the end, seven Tipp players won All-Stars last weekend though whether that was down to their own brilliance over the summer or Wexford’s inability to close out that epic semi-final is debatable.

Certainly it was Tipp’s best performance all year, one that Nicky English would later describe as ‘for me, one of the best victories I ever saw Tipperary having’ but O’Connor and his colleagues walked away with a head full of regrets, feeling they let themselves down. Over three months on, he still feels the torment of unfulfilled potential.

“Still have nightmares about it,” said O’Connor, speaking at the launch of the Gaelic Players Association Student Report 2019. “We’d won Leinster and we weren’t going to settle for that, you want more and more and that’s the cruel thing about sport, you don’t always get it.

“In that space of 10 minutes, when we were five points up with about 10 minutes to go, to only realising two days later how we went so far away from our game plan ourselves. . . .

“It was certainly self-inflicted and it was the damage we did to ourselves on the pitch. We didn’t keep playing spaces, that’s the annoying thing and the most upsetting thing, for Davy as well as us, how we just went away from the game plan one small bit and it eventually lost us the game.”

The Davy, of course, is Davy Fitzgerald who will return for a fourth season in charge. Despite winning that breakthrough Leinster title – thanks in no small part to O’Connor who won the late penalty that Mark Fanning converted against Kilkenny – there’s still a clear sense of unfinished business.

The tale of the tape reads 16 Championship games played under Fitzgerald in three seasons, seven of those won, six lost and three drawn. It’s only now that O’Connor feels Wexford are really maturing as a unit and a Fitzgerald departure would have set all of that progress back.

“If a new manager had come in, it obviously then takes a year to set down your tone or your mark,” said O’Connor.

“Hopefully in your second year then, you try to go and win something. But having Davy for three years now, we know the standard he requires, there isn’t going to be any curve balls to it. And I think winning silverware this year is kind of after opening the eyes of the players to what we can achieve.”

Fitzgerald carefully weighed up his options after the championship though O’Connor said he never believed the ex-Clare and Waterford manager would jump ship to a rival.

“Firstly, you were listening to the Galway rumours but we know Davy so well now that we knew he wouldn’t do it,” said the 21-year-old.

“If that was true, he would have let us know that he was in talks and stuff like that. There was no fear within our dressing-room that Davy was in contact for the Galway job. It spread like wildfire but we had no fear that he was going anywhere else.

1 Diego Maradona dies of heart attack, aged 60
2 Keith Duggan: Through the glories and the disgraces, we were all Maradona addicts
3 Darragh Ó Sé: Cork and Donegal went out with the wrong attitude
4 Gordon D'Arcy: I know what Joe and Cheika would do. Fix the basics
5 Handful of God: Five magic Maradona moments
Real news has value SUBSCRIBE