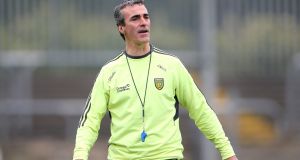 Former Donegal manager Jim McGuinness has ruled himself out of the running for the vacant Mayo job. Photo: Cathal Noonan/Inpho

Jim McGuinness has ruled himself out of the running for the vacant Mayo manager’s job, saying his immediate future is focused on soccer.

The man who led Donegal to the All-Ireland title in 2012 has been linked with the Mayo job since Stephen Rochford quit at the start of the week but, speaking to Newstalk’s Off The Ball, McGuinness ruled out the possibility.

“Not at the moment, definitely not,” he said.

“I’m ready to take a managerial position (in soccer). The most important thing is not about getting a club, it’s about getting the right club.

“It’s been a long journey of development in another sport. It is a massive challenge, there’s no doubt about that.

McGuinness appeared at the Croke Park event alongside former Mayo manager James Horan who also addressed speculation linking him with a return to the job by saying that he hasn’t thought about it.

“I genuinely haven’t really thought of it,” he said.

“I’m a Mayo man that absolutely loves Mayo football and I really love coaching guys that are ambitious for teams to do well, so that’s what I love doing.

“At some stage, of course I’d love to get involved again but is the time right for me, for the county board, I don’t know if it is. There’s so much stuff there.”

The current Westport manager said he was fully focused on some big upcoming games with his club, saying he would not take the Mayo job if it was offered to him right now.

“At the moment, I would say for me personally, no. I’ve so much going on at the moment.”