Mayo boards fiddle with the canapes while the dinner burns 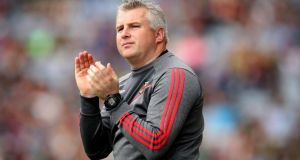 It has been a long week for Mayo’s sons and daughters. Those seven days had more drama packed into them than the entire 15 series of Made in Chelsea put together. And throughout the whole thing, both Mayo county boards (the women’s and men’s football) reminded me of the party host who spends all their time and energy fussing with doilies and ironing napkins when all everyone wants is a decent feed.

It seems to me that both Mayo county boards are obsessing over the wrong thing.

Let’s take a quick recap as to what happened. On Tuesday of last week, the Mayo Ladies’ Gaelic Football Association county board ruled that Carnacon brought the game into disrepute after their players left the county panel. As for players from other clubs who had left the panel, they must have walked out politely or something because they weren’t thrown out of the championship. But Carnacon, the defending women’s All-Ireland champions, were kicked out of the championship after a vote from other clubs and members of the committee. That’s the first instance where one board is focusing on the wrong thing.

Throwing out their only hope of regaining a piece of silverware was, in my opinion, an outrageous decision. All of the Carnacon players, not just those who had left the county panel, have been giving up their time willingly to fulfil their duty to Mayo fans. Instead of the county board trying to sort out the mess that was laid before them, they dug their heels in, refused to make the best of a bad situation and instead went to their local hardware store, bought the biggest shovel available and dug a hole so deep they can almost feel the heat from the Earth’s core.

And you know what that reminded me of?

Our friend throwing the party who is still fiddling with canapes and bite-sized bruschetta while the greater number of guests present are already planning a trip to the chipper on the way home.

In Mayo LGFA’s case, you kick out the most successful club, who continuously raise the bar year after year. Imagine if this was men’s football and the Derry board kicked out Slaughtneil, or Galway punished Corofin, because some of their players went to America rather than play for the county. It’s been a full week since it happened and I am still having sleepless nights trying to make sense of it.

Fast forward to Pope Francis’s visit, and he signs a Mayo jersey, and we’re all thinking “has the curse been lifted? Is it the chosen one?” In a word, no.

Back to reality: think of our well-meaning host distributing breadsticks when the chicken hasn’t gone into the oven yet.

Overall, both Mayo county boards appear to be focusing on all the wrong things in order to achieve success. It’s everyone’s fault bar their own. Everyone else is the issue, not them. And the frustrating thing is they are putting the time and energy into the wrong things.

Do you think Cork LGFA, Dublin LGFA, Dublin GAA and Kerry GAA put all their energy into nonsense that doesn’t matter? No. And that’s why they are serial winners and will keep on winning. On an international front, it’s the same thing with Manchester United. Ed Woodward put all the resources, time and energy into making United a profitable club. At least to Woodward’s credit, he succeeded in doing that, but United are as worse off now than ever.

So the next time you’re slowly expiring while unmerited finishing touches are laboriously added to an already tepid leg of lamb, just think of your friends from Mayo.

The only people who come out of this looking good are the players on both teams. Yeah, they might be intense and grumpy for demanding standards and demanding a certain level. But winners can, and will be, both intense and grumpy. Successful people of all walks of life are intense and sometimes a little grumpy because they’ve to interact with people who care about the wrong things in life and in football.