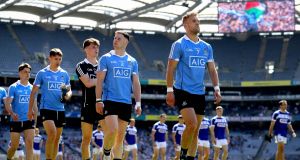 Jonny Cooper leads Dublin into action against Laois in the Leinster final. “Teams are trying to play to their own advantages the best they can and ultimately get a result.” Photograph: Ryan Byrne/Inpho

Be the king of small things. Be unrivalled. That’s the Jonny Cooper motto (on twitter) and if it was up to him there would be no need for protection from Philly McMahon or Cian O’Sullivan.

Cooper is happiest being left alone on the square’s edge with unmarkable goliaths like Michael Murphy or Aidan O’Shea or Kieran Donaghy and this Sunday he craves Richie Donnelly duty.

“Personally I like the man-on-man stuff as I have to play on the edge and there is no safety net, which can be detrimental at times and very critical in terms of conceding scores, but also I think for me personally it makes me play my best.”

Yet the gladiatorial element of Gaelic football has been neutered. Whoever Cooper is minding, McMahon will shadow the threat and vice versa to deny Tyrone a clean swing at Stephen Cluxton’s goal.

“We are there to win and perform. From a supporters’ point of view supporters want to see scores and attacking but the trade off is we are trying to do what we see fit to get us the right result. I know that doesn’t always marry up to what somebody else wants to see. We have to do what we think is right, to win. It’s hard to get that connect.”

If truth has been told, O’Sullivan is expected to shake off the hamstring twang that saw him whisked out of the Galway semi-final. If the Kilmacud Crokes man is worse than is being said, Cooper might take the sweeping duties but, again, he is proven in that berth.

Dublin cannot be caring about the flawed rules of the game they so expertly manipulate.

“I’m sure they will talk and maybe change the rules. It’s hard because there is going to be a disconnect in that teams will play to their advantage and strengths and talents. Are you going to kick it in to one body against two or three bodies? Probably not. People need to get over it.

“Or just maybe understand teams are trying to play to their own advantages the best they can and ultimately get a result for the team. It’s probably not great for the neutral in some cases but that’s just the way it is.”

Listening to this player’s view and reading Jim McGuinness makes Sunday’s All-Ireland final feel like a watershed moment for the sport.

Cooper has a day job working on student recruitment for DCU – the four time All-Ireland winner travels around the country to tell Leaving Cert students about courses on the Glasnevin campus – but denying talented footballers space and scores is his real area of expertise.

“I do like the technical side of it. The push and pull of force, the intricateness which is not always easy to apply, especially in my position, at different speeds. I slow-mo stuff because it’s the one tackle or the one contact, the one fingertip that will make something happen.

“We beat Donegal in 2010, in the under-21 All-Ireland final, when Michael Murphy hit the crossbar, which was a couple of inches wide, so I always think of that. It was only a couple of inches that is the separator between you winning and losing . . . .”

That was the start of Jim Gavin’s ascent to the current rarefied atmosphere. Rory O’Carroll marked Murphy that day, Cooper was at wing back beside James McCarthy with Dean Rock up the other end.

Cooper was unable to break into Pat Gilroy’s match day squad but Gavin’s appointment as senior manager saw him enter a team he currently leads – having lifted the Delaney Cup in the temporary absence of Cluxton this summer.

Natural leadership rattles in his bones.

“...Those couple of inches can be broken down into technical – eye or hand position. I’d say other lads do look at it but I’m probably a bit weird, OCD I guess in going after something.”

People like Cooper must be treated like gold dust in any sports team. Or any team. They will do what needs doing, keep analysing until the plug is pulled and they are sent off to pretend they are normal.

“You can look at other sports, the basketballers and their two ball stuff and the goggles they wear...there is so much out there now with professional sports teams getting into the science side of it. Anything and all, behaviours – the way people carry themselves.