Tipperary beat Cork to last ever All-Ireland U21 title 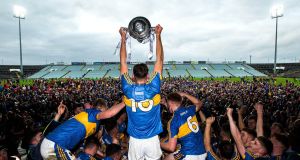 Tipperary picked up what will be the last ever All-Ireland under-21 title, with an injury-time goal from substitute Conor Stakelum proving decisive as his side claimed a deserved three-point victory.

Cork will be bitterly disappointed with the manner of this defeat, having clawed back a three-point deficit with four successive scores to lead by a single point heading into additional time.

Cork destroyed Tipperary when the sides met in the Munster final, with the Rebels prevailing on a scoreline of 2-23 to 1-13, but right from the get-go one got the feeling this game would be a much closer affair.

Tipperary manager Liam Cahill refused to rule out going for the vacant Tipperary senior manager’s position when speaking after the game – while also hinting he may be tempted to stay with the under-20s.

“Whether I’m right or not for the job, I’m not sure. I’d like to remain where I am. I know I’m talking a bit too much but I feel now the right place for me to be is with next year’s under-20s, and to get another year under my belt – and then to see if the opportunity comes around again.

“But look there’s no time like the present. We’ll sit down and see if I’m approached and if we do, we do. The bottom line, as I said during the week, is the manager’s appointment is big, but it’s whoever is going to be on this man’s ticket is the key.”

Tipperary started the game well and were awarded a penalty when Mark Kehoe was taken down by Cork centre-back Mark Coleman.

Jake Morris made no mistake with the finish to give his side a 1-5 to 0-1 advantage.

Cork responded superbly, though, hitting six points in succession to reduce the deficit to one before Denis Ring’s side managed a goal of their own.

The goal was superb, with Conor Cahalane accelerating through the Tipperary defence, beating the attempted tacklers, and having the composure to finish past goalkeeper Barry Hogan.

By half-time Cork were in front 1-9 to 1-7, with scores from Cahalane and Robbie O’Flynn aiding the Rebels. Tipperary remained in the hunt as Morris and Jerome Cahill spearheaded the attack.

It was Tipperary who looked energised after the restart as they registered four of the first five scores of the second half. They were leading by 1-12 to 1-10 in the 48th minute, though the Rebels replied with points from Darragh Fitzgibbon and Cahalane.

Tipperary appeared to have the game won when midfielder Stephen Nolan found the net with a superb solo finish and Cork really had a mountain to climb at this stage.

Declan Dalton started the Cork revival with an excellent free before a fantastic point from Brian Turnbull halved the deficit. Dalton then levelled the match with a free after Darragh Fitzgibbon was fouled, before Tim O’Mahony gave his side the lead and at this stage the momentum was very much with Cork.

Conor Stakelum found the net for Tipperary before David Gleeson added an insurance point to send the Tipperary crowd into raptures.

Cork manager Ring rued the late goal when speaking after the game. “There was no time to come back. You are into injury-time. It is a great time to get a score, it is a terrible time to concede a score. Sometimes it happens for you, sometimes it doesn’t.

“It is a pity we ended up being in that position where we gave them an opportunity to come back. We may possibly have had a couple of chances to push on and win it.”

But in the end it was Tipperary’s day.