Tyrone’s brothers-in-arms not lost on the Cavanaghs 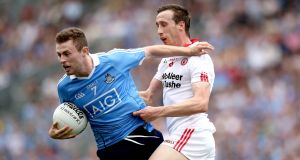 At some point over the next 48 hours Colm Cavanagh will run into his brother Seán and they will, naturally, talk about Sunday. The crowd, the weather, maybe who else they know is headed for Croke Park.

Only that will be the extent of it. If Seán has any thoughts on what exactly is needed to beat Dublin he won’t be offering them to Colm, and vice versa. Their sibling alliance has always been built on the deep understanding for the other – and for Seán that means leaving Colm to let his football do all the talking.

It possibly helps that there are still four sets of brothers on the Tyrone panel – the McCanns, Tiernan and Conall; the McGearys, Kieran and Hugh Pat; the Brennans, Rory and Lee; and not forgetting the Donnellys, Matthew and Richard.

Still nothing will easily replace what the Cavanagh siblings brought when playing together in Croke Park, the last taste of which was them winning the All-Ireland intermediate club football title last February, with Moy Tír Na nóg.

Sunday can’t be easy on either of them. Just one year into his retirement, the three-time All-Ireland winner with 89 championship appearances for Tyrone must be wondering what role he might have played on Sunday, and no one senses that better than Colm.

“Ach yeah, I’d say there’s no doubt,” says Colm. “There’s no substitute to playing the game, and I’m sure Seán will agree on that. I’d say he’s watching now, thinking that, but he’s fully behind us and he always has been.

“He’s been saying for years that there’s something in this team. It’s bound to be hard, it’s bound to be difficult for him. It’s just a big occasion, such a big day.

“But, again, hindsight’s a wonderful thing. He can’t go back and change his mind or anything. So it’s one of those things. Again he’s fully behind us and fully supporting Tyrone and hoping that they win, but he’s only human after all. He knows these big days, and there’s nothing to exchange them.”

Indeed Seán had been singing the praises of Mickey Harte’s most recent Tyrone manifestation for the last number of seasons, but what is possibly bugging him more than anything else is missing out on the chance to play Dublin again.

His last game for Tyrone was last summer’s All-Ireland semi-final defeat to – or hammering rather by – Dublin, and any Tyrone player would relish the chance to help make some amends for that performance.

His 89 championship appearances is a record for any outfield player (one ahead of Kerry brothers Tomás Ó Sé and Marc Ó Sé), with Dublin goalkeeper Stephen Cluxton currently on 97.

Seán was central to the Tyrone team since making his debut a year out of minor in 2002, and that sibling alliance with Colm was present since 2008, defender Cathal McCarron the only other survivor from that All-Ireland-winning team.

And by now no one senses what Colm needs to do on Sunday better than Seán.

“We live two doors from each other, so we do still see each other, we’d still be out the front playing with the kids and that, and football does come up and we have a few conversations around things.

“But it’s all light-hearted. It’s not as if he [Seán] is coming giving me advice at this stage. He knows rightly I’m old enough to stand on my own feet. He doesn’t ask me about what’s going on in the Tyrone set-up. He respects me from that point of view, he knows rightly that we have to focus on our own things.”

As all brothers do.