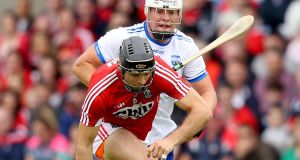 Cork’s Christopher Joyce is tracked by Tom Devine of Waterford during the Munster SHC Round Five match at Semple Stadium, Thurles. Photograph: Inpho

Four games, two wins, two draws, and a place in the Munster hurling final. It wasn’t the perfect round-robin record but enough for Cork to top the table. One wrong result the other way and it could have been so different.

Sunday’s win over Waterford at Semple Stadium sealed the deal, thanks in wondrous part to defender Christopher Joyce, the Na Piarsaigh man hitting one of the three injury-time points – a monster from well inside his own half – to ensure Cork’s three-point victory.

Had they lost, Clare (also on six points) would have played Limerick (five points) in the final on July 1st, with Cork, the defending champions, going into the preliminary All-Ireland quarter-final on four points: despite the precarious nature of the format Joyce is definitely a fan.

“It’s been brilliant,” he says. “Four games in five weeks? Before it would take you two years to play four games at some stages. At the end of the day you want to play for Cork as much as you can. It was great, I really enjoyed it.

“Maybe some people are saying the fatigue is tough. But after the three weeks, against Limerick, I didn’t think it was a major issue. You are training just as hard on your off weekends anyway. You have to be putting points on the board the whole way through. We have gone through unbeaten, with six points, enough to get to a Munster final thankfully.”

Waterford – even with their summer already poised to end – certainly put it up to Cork, only to visibly tire at the death, further weakened by injuries to Noel Connors, Stephen Bennett, and Brian O’Halloran. Their scheduling of four successive weekends (coupled with the fact all were played away) has thrown some criticism at the format, only Joyce is not so sure.

“To be fair people were saying Waterford were out. Waterford are a great hurling county, they got a lot of injuries, but were always going to come and give a good account of themselves. It was the fourth week in a row, maybe they just tired a bit at the end and we had the fresh legs. That might have helped us to get to the 75th minute rather than them. But we never gave up, and that’s what we always looked at it. We always want to stick to our game plan from first minute to last minute.”

“They will fancy their chances against us the next day, to put last year right. We need to try and put a 70-minute performance in which we haven’t done yet. We have done enough to get to a Munster final but we are still searching for that full 70-minute performance, if we can don’t in a Munster final we will go a long way. Clare are a very good team, have been underachieving in the last number of years. They have won three games in a row. They will definitely be favourites.”

Clare captain Pat O’Connor is also a fan of the format, while suggesting it may need some tweaking to better balance the schedule of games:  “I can see how if we were on week three or four consecutively, that a more tired body wouldn’t be able to absorb some of the hits,” he says. “But you have to commend the championship, it has developed lads, you find out so much more about lads, and it’s been brilliant.

“All you want is games – games, games, games. We’ve had four in five weeks, and granted we have had the ideal run with two games, a break, and two games. But the games still weren’t easily won; we won three and lost. To get to the final is brilliant and very satisfying. We feel we let ourselves down last year.

“I suppose we got the rub of the green in terms of the draw but still we needed to stand up and lads stood up. I think a massive turning point for us was in the dressing room after (losing) the Cork game. We came in and it was usual story, heads and shoulders slumped. A couple of lads just got up and spoke and said ‘this isn’t like other years’. I really do believe that those couple of minutes and the couple of lads who stood up and spoke there, really set it going.

“The mental side of it is fairly exhausting; it probably occupies your thoughts the first thing in the morning and last thing at night. It’s what we asked for, so that’s the joys of it. Limerick are a seriously impressive outfit as well and they will be back. We certainly haven’t seen the end of them yet this year anyway.”

Tickets will go on sale towards the end of this week. Check munster.gaa.ie for further details in the coming days.