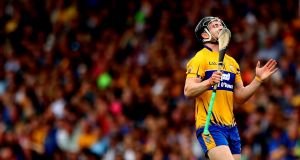 Tony Kelly: Clare will be looking to the former Hurler of the Year to help inspire a victory over Limerick at Cusack Park. Photograph: James Crombie/Inpho

For the past two years, Galway have struggled to put good displays back to back but there may have been a straw in the wind with the walloping of Sligo following success in the big Connacht summit in Castlebar.

Roscommon’s win in last year’s final was predicated on tactical coups in defence, Enda Smith’s display at centrefield and getting their lively forwards into the game. Smith’s form hasn’t been at the same level this year and Galway’s defence has looked more assured all year.

Crucial question: will they moderate the defensiveness sufficiently to allow a full press on Roscommon’s suspect defence? Fintan Cregg may not play centre back as listed and overall they will need to steady the ramparts having conceded two goal chances to Leitrim in the first quarter, as signs are that Damien Comer, Barry McHugh and Shane Walsh are beginning to maximise output.

Both teams have been going well but Galway anywhere near full bore will have too much.

Just the ticket: Sold out.

An exceptional occasion beckons with both counties vying for a Munster final place. Clare’s late surge in Thurles was a morale boost even if Tipp ain’t what they were and the home match means a lot – they haven’t lost here in championship to Limerick since 1990.

They will, in all likelihood, be more assured this week, eliminating the poor touch that looked like unravelling them a week ago. All that said, Limerick have been gaining altitude all year. Last week’s cuffing of a bedraggled Waterford was exactly what was required to maintain momentum and their forward power gets more impressive each day.

Their half backs have been dynamic and steadfast and the exchanges will be ferocious in that middle third. Limerick have been in the ascendant all year and daunting as their latest test is, in the dreaded third week, the only way is up.

Just the ticket: Sold out.

Waterford v Cork, Semple Stadium, Thurles, 2.0 – A grim time for Waterford, seeing out their championship about three months earlier than last year and with the sparkle of the feisty moral win over Tipp well flattened last week.

Limerick showed that Cork can be disrupted by aggression but whether on their fourth and final week, Waterford can find that in the toolkit is open to question. Cork will benefit from the week’s rest after two gruelling draws and if they can apply the sort of polish evident in the first-half of their last visit to Thurles, their opponents will sadly but literally have no answers.

Stephen Kenny vowing to do things his own way, an Ulster final like no other 08:14
Ireland boss Stephen Kenny: ‘I’ll do things my own way. Put it that way’ 06:00
Mickey Graham calls for some clarity from GAA on championship plans 08:24
Whole new ball game: Hats, scarves, facemasks - An Ulster final like no other 06:00
Damian Browne: To the ends of the Earth in search of the ‘savage warrior spirit’ 06:00
Crossword Get access to over 6,000 interactive crosswords