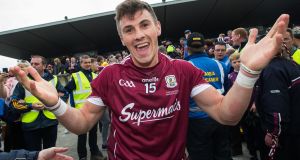 Shane Walsh celebrates the Connacht final win over Roscommon: “It’s a young group so there’s definitely so much more I think in this group.” Photograph: Tommy Dickson/Inpho

Wnning back a Connacht football title, dethroning rivals Roscommon, with a performance that got steadily better as time progressed and still plenty to work on. It’s not a bad way of securing the first place in the new Super-8 phase – and, for that, Galway certainly have Shane Walsh to thank.

Walsh enjoyed the near perfect afternoon in Dr Hyde Park on Sunday – nailing all five of his frees, and hitting three points from play.

Galway also stopped Roscommon from scoring a single point from play in the second half and that, says Walsh, was all about attitude.

“Just getting in Roscommon’s faces was a big thing,” says the Kilkerrin-Clonberne player, who hit all five frees with his left foot.

“We made a lot of mistakes in the first half, and we just about cut them back, just started doing what we’ve been doing very well the whole year, moving the ball quickly and really challenging Roscommon.

“We didn’t ask questions of them in the first half. They were probably sauntering around the place and it probably didn’t look good for us at half-time. Look, it’s a sign of the team. The average age is about 24 or 25. We kept going and kept going. That’s what the team is all about. The result was the big thing at the end of the day.

“We went in at half time and we were lucky we weren’t a lot worse off. We didn’t get going at all and made mistakes after mistakes. That was credit to Roscommon that they put us under pressure. They stood up in the first half but in fairness I thought we really dug in as in the dirty stuff towards the end of the first half just to keep the scoreboard down and keep us ticking over.

“We got back in at half-time and Kevin [Walsh] gave us a right rollicking because we’re a lot better than that. In fairness everyone stood up, to a man, in the second half you saw the strength of our squad coming on towards the end. Everyone pulled their own.”

Galway’s opening game in the Super-8s will be against the Munster champions in Croke Park on July 14th/15th: they will also be joined by the runners-up in Ulster and Leinster, or the side that beats them in Round 4 of the qualifiers.

Having also beaten Mayo and Sligo, Galway, says Walsh, are exactly where they want to be.

“Definitely. We’ve three weeks now to regroup again, lads are going back to club weeks and then we’ve to get ready for the Super 8s. This has been a new adventure and it’s nice to be the first team into it as well.

“We were hurting from last year and we didn’t do ourselves justice at all. That was a big motivating factor. In the first 35 minutes we were probably saying, ‘Was it a one-off or what was it?’ It’s hard to put last year into words but this year it was just all about us performing and getting what we really wanted.

“Thankfully you saw the runners, you saw the subs coming on the likes of Adrian Varley, Eoghan Kerin, Peter Cooke, Army [Sean Armstrong] was brilliant when he came on. They all chipped in and did their bit. That’s what makes our team so strong. The group is learning all the time. We’ve found ourselves in every situation between the league and championship.

“We said that was always going to be a big area. If we could get a stranglehold around the middle that was a big thing. We had Tom [Flynn], Paul [Conroy] then when you look at Ciaran Duggan – man of the match against Mayo and was injured the last day. He came in and then you’d Peter Cooke coming in as well.

“I don’t think there’s many squads that boast that kind of power around the middle. It’s great to have that at our disposal. In fairness to Kevin and the lads, they threw them in there when the game was in the melting pot and they really drove us home.

“It’s a young group so there’s definitely so much more I think in this group. We had the likes of Danny [Cummins] that wasn’t even togging and lads that are flying in training. Kevin and the lads have the worst job in the world in trying to pick 26 players to tog for Galway. It’s a great place to have it. I really do think that if lads keep driving it we can bring it to another level.”