Leinster the epicentre of this year’s football shocks 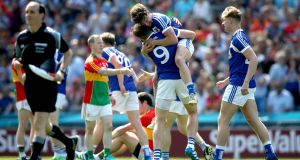 To date it has been a notable championship for surprise results. With just the provincial finals to be settled before the All-Ireland series takes over, there have already been eight results in which counties have beaten teams who played in a higher division of the AFL than they did. That’s twice the rate of last year by this stage.

More strikingly, six of those eight wins were achieved by Division Four counties. Admittedly the epicentre of these shocks has been in Leinster, whose provincial final on Sunday features Laois, who won the divisional title last April and are the first Division Four team in over 20 years (since Offaly in 1997) to have reached the Leinster final.

Some of the categorisation is marginal. Laois were fortunate to survive against Wexford, who exited the championship having lost to two Division Four teams, concluding with Waterford in the qualifiers and who will be heading down there themselves next season.

The big surprises were the defeats of Kildare and Meath, the two most populous counties outside of Dublin but beaten by Carlow from Division Four and Longford from Division Three, respectively.

Former GAA president Liam O’Neill currently chairs Leinster Games Development. He says that whereas there is a good tradition of competitiveness in the province, this year’s events have been unusual.

“There is a pattern there where people sometimes put up their heads but nobody would have predicted that three [Laois, Carlow and Longford] of the four Leinster semi-finalists would have come from the groups that they did. It’s an amazing year.

“It’s positive because there is a lot of focused work going on in the counties, and the Games Development section in Leinster would be a fairly slick machine in terms of rolling out initiatives.

“At underage there’s still huge work going on. It is significant that Longford did do well at minor level over a number of years and now they’re doing well at senior – not just this year but in the qualifiers in recent times.

O’Neill believes the achievement of Laois, his own county, has to be seen in the context that the county was probably not really a bottom-tier county, pointing out that relegation last year came on foot of three one-point defeats, and that his county getting its act together has inflated the rate of shocks.

“John O’Loughlin [Laois player] gave an honest appraisal of Laois – that a lot of people thought they were playing as individuals and that there was a lack of a team ethic but that now the team is playing as a team.”

There is also the issue of Dublin, whose domination of the province sees them going to Croke Park on Sunday hoping to extend their already record-breaking sequence to eight successive provincial titles. Does that tend to demoralise other counties and equalise standards in the champions’ wake?

“I think it does,” says O’Neill, who isn’t, however, pessimistic about the long-term impact. “There’s none of the other football counties in Leinster jealous of Laois having to face what they’re facing on Sunday. I did make the point on radio that some team is going to beat Dublin in the championship shortly. No record in sport lasts.”