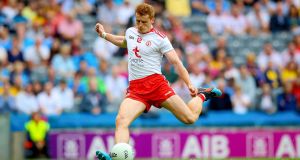 Tyrone’s Peter Harte: onus will be on him and Niall Sludden to provide the right service for Mattie Donnelly and Cathal McShane with long kick-passes. Photograph: Tommy Dickson/Inpho

It is going to happen some day, of this we can be sure.

Tyrone will not spend the rest of their lives and ours continuing to lose to Kerry, Mayo and Dublin. After beating all three in the space of six weeks to win the 2008 All-Ireland, Tyrone have lost 10 straight games against that trio in the 11 years since. To win this All-Ireland, they’ll have to beat two of them, starting with Kerry tomorrow. It’s going to happen someday.

Well, they’ve probably never been in better shape across the second half of the Mickey Harte era. You have to go back to Stephen O’Neill in 2005 for the last time they had the leading scorer in the championship. This year, Cathal McShane is 14 points up on Seán O’Shea with at least one game apiece to go. Short of an injury, you’d imagine he’ll see it out.

Add in the fact that Peter Harte is only two points behind O’Shea. And that Mattie Donnelly is the best part-time inside forward in the game outside of Michael Murphy. Whatever Tyrone may have lacked in other years, they’re not short of a cutting edge this time around.

They are also – and this hasn’t always been the case either – the more battle-hardened side here. This is Tyrone’s fifth All-Ireland semi-final in seven years. Just over half of their likely starting team remains from the 2015 last-four defeat to Kerry. That’s a lot of hard lessons learned and bitter shots downed.

By comparison, only five of the Kerry starters that day will feature here. In fact, there’s almost as many representatives of the Kerry minor team that beat Derry in the curtain-raiser back then as there are men still standing from the senior game.

Jason Foley, Gavin White, Tom O’Sullivan and O’Shea have been given battlefield promotions in the meantime. Throw in David Clifford and Diarmuid O’Connor from the following two years of minor crops and you see how Kerry are comfortably the youngest of the four remaining teams.

Those younger Kerry players also come with the small (and obviously fixable) footnote that they haven’t yet won a senior game in Croke Park. The same is true of Shane Ryan, Killian Spillane, Brian Ó Beaglaoich, Micheál Burns, Dara Moynihan and others in the 26.

Most of them have played there four times and only have the draw against Donegal a few weeks ago to show for it. It’s not a thing yet but lose tomorrow and it could feasibly be on its way to becoming one.

So Tyrone have the experience. The major question hanging over the game is, have they got the game plan? Given how Kerry like to set up in defence, with two man-markers in the full-back line and nobody covering in front of them, it would surely be bordering on perverse for Tyrone to do anything other than start Donnelly alongside McShane inside.

While going with McShane up there on his own wouldn’t quite be playing into Kerry’s hands, it would at least be leaving a question unasked. This is no time to be driving home with such an obvious what-if rattling around in your head. Especially since the alternative – Tyrone’s default massed defence game with one player ploughing a lonely furrow up front – has been shown time and time again not to work at this altitude.

If Donnelly and McShane do both play in there, the onus will be on Peter Harte and Niall Sludden to keep them fed with long, arrowed kick-passes. Assuming Peter Keane doesn’t suddenly decide to employ a sweeper, Kerry’s hardest work will be done around the middle third, flooding the area between the 65s with bodies, tackling hard and at the very least causing those deliveries from Harte and Sludden to be rushed.

Of course, this is all arguably the wrong way to be looking at the game. Yes, Kerry have to have a plan for McShane and Donnelly. But equally – and possibly more to the point – Tyrone have Clifford, O’Shea, Spillane, Paul Geaney and Stephen O’Brien to contend with at the other end.

If Clifford’s second season hasn’t quite been as whizz-bang-wow as his first, he was still electric against Mayo and gave Cork plenty of it in the Munster final.

Stephen McMenamin marshalled him through fair means and foul in the Donegal game and he can expect more of the same here. But Geaney is having his best season since 2016, O’Brien and O’Shea are both no more than a good half away from being All Stars and Spillane has quietly scored three from play in both of his last two games. Kerry can be relied upon to put up a score.

Can Tyrone better it? They must. Kerry’s young folk won’t go on failing to win in Croke Park forever and by the time Tyrone next meet them on this stage, there’s a fair chance Kerry will have improved a good distance past them. If it’s going to happen, now is the time.