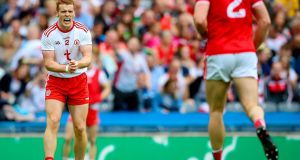 Tyrone’s Peter Harte: he is very much on a black-card tightrope. Photograph: Tommy Dickson/Inpho

Tyrone’s Peter Harte is the only player in the football championship who could miss an All-Ireland semi-final in the second week of August due to a black card suspension.

There are, however, 19 players who could miss a semi-final replay or an All-Ireland final if they pick up two more black cards, or two other combinations of double yellows or a yellow and black card.

Any player who receives three black cards within that year’s league and championship campaign, three double yellow cards, three instances of a black card following a yellow card in a match, or any combination of the previous three will be suspended for one match.

Harte picked up black cards against Donegal in the Ulster semi-final, and in his team’s round four qualifier win over Cavan. He was also shown a black in his team’s win over Longford, but later had that rescinded.

Over the past two seasons he is one of three players to have a card rescinded after an accumulation of threes infractions, while only two have served suspensions. So three of five have got off and neither missed a championship match.

Down’s Kevin McKernan and Wicklow’s Seanie Furlong both had their suspensions last summer follow into the start of this year’s league as their campaign ended with the contest they were shown the final card in.

This year, though, the stand-alone black cards issued during the league were all wiped thereafter and did not carry for possible suspensions. That is because those 95 black cards – albeit they were awarded for the same fouls as in previous years – were dished out during the trialled sin-bin rule wherein a black card meant the player was sent off for 10 minutes. Since the championship the black card has reverted to a player being replaced for the entirety of the match at the expense of a substitution.

None of the five counties mentioned above – those who remain in the race for All-Ireland glory – have benefitted from the scenario as those players have not been shown any further black card combinations since. Black cards which followed yellow cards during the league did carry though, and likewise double yellows.

Cavan’s Conor Moynagh and Killian Clarke, two of their most influential players, did avoid suspensions by having their league black cards wiped. Likewise Meath’s Shane Gallagher. The Royal’s tenacious corner back would have missed last weekend’s match against Mayo, Moynagh would’ve missed the Ulster semi-final replay, and Clarke’s one-match ban would have carried into 2020.

The most cynical team in 2019 – the team shown the most black cards – was Galway. They were shown seven in the league and three more in their disappointing summer campaign.

Not including New York who do not compete in the league, Sligo are the only team who did not receive a black card in 2019.

Donegal have received the least of the Super 8s teams with two, Dublin have received three (two during the league), Kerry have only played four matches and have received six black cards, Mayo have six in seven matches, and Tyrone have seven in eight.

Pull-downs have accounted for 43 per cent of the black cards given, 28 per cent were for body collisions, 30 black cards have been shown for trips, and 10 for remonstrations and provocative language.

The referee who has officiated the most amount of matches this year has also shown the most black cards – Barry Cassidy has been the man in the middle for six games.

So, while black cards may be on the decline, a one-match ban is inconceivable at this stage in the competition. There are 19 who need to pay special attention, but for now Peter Harte is alone on the black card tightrope.