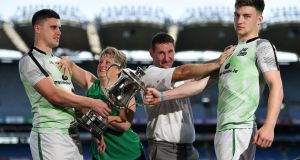 All-Ireland poc fada champion Cillian Kelly, left, with his brother and 2019 Leinster champion Cathal Kelly and their parents Mary and Seamus Kiely at the launch of this year’s competition at Croke Park. Photograph. Photo by Brendan Moran/Sportsfile

Offaly hurling defender Cillian Kiely has called on officials to search for a non-native, “no bullshit” new manager to drag the county from the doldrums.

Kiely said he doesn’t believe the players should have a say in who replaces the sacked Kevin Martin, arguing that it “‘gets too messy” with “too many voices”.

He said his personal opinion is that a no-nonsense manager from outside the county is required and suggested Kilkenny would be a good starting point in the search.

Kiely was impressed with the work Eddie Brennan did this year in Laois and also noted Henry Shefflin’s successful first season in management with All-Ireland club winners Ballyhale.

“I’d like to see an outsider coming in, the likes of Eddie Brennan going into Laois, a no-bullshit manager that will just come in and say, ‘Listen, this is the way it is, if you’re not happy there’s the door. If you want to commit with me, we’re going to have a good year’,” said Kiely, part of the Offaly team relegated to hurling’s third tier Christy Ring Cup.

“I think that’s where it needs to go, no minding lads at the end of the day. I know everyone needs to be friends but a manager is kind of a step above, you have the craic with him but he can’t be your best friend. He can’t be listening to you whinging that you’re not on the team.

“I think a Brian Cody kind of an outlook is what you need, a ruthlessness is where it needs to go now.”

Kiely, who will defend his M. Donnelly All-Ireland Poc Fada title on August 3rd on the Cooley Mountains, admitted the Offaly seniors need an injection of confidence after a morale-sapping few seasons.

“You can talk and say, ‘we’re going to win this game’ or whatever but deep down you’re nearly walking out of the dressing-room two days before the match saying, ‘jaysus, I don’t think we will win it’,” he said. “That needs to change.”

Asked if there is another Eddie Brennan out there, Kiely nodded. “I’d say there is,” he said. “Kilkenny is where I’d kind of be looking because they have won so much. You look at Henry Shefflin, you look at Eddie Brennan, as managers, they are taking that Brian Cody approach, that ruthlessness.

“I think that’s really the only way Offaly can progress. We [Kiely’s club, Kilcormac-Killoughey] hurled Ballyhale a couple of years ago in a Leinster final. We had them bet. They got a draw out of it. It went to extra-time and they were getting scores out of nowhere.

“They beat us by three points in the end. It was just like, there’s no dying in them. I think Eddie brought that to Laois and even Henry brought it to Ballyhale. It’s in them and someone like that could definitely bring Offaly to another level. It’s finding them is the thing, hopefully we can find someone.”