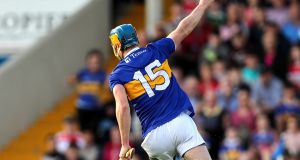 A Jake Morris goal in the final minute of added time snatched victory for Tipperary in thrilling finale to the Munster under-20 hurling final at Semple Stadium Thurles on Tuesday.

Tipp were in the last chance saloon when the senior player raced onto a loose ball to fire past Ger Collins and send the home support into raptures.

It came just as it looked like Cork had claimed victory with sub Evan Sheehan’s goal in the 58th minute which nudged the Rebels in front at a time when the home side looked to be in control.

Played in front of almost 10,000 supporters, the game took a while to spark into life with Conor Bowe scoring his third goal in two games, taking a pass from Billy Seymour to fire to the net.

However, the opening quarter belonged to Cork who were sharper and they responded well with Sean Twomey firing to the net on 14 minutes as the Rebels went into a five point lead by the 21st minute with Shane O’Regan to the fore with 1-3.

Tipp upped the intensity and finished the half the stronger with their half back line thundering into the game and they whittled down the lead to two when sub Kian O’Kelly scored a fine individual goal in the final minute of the half with the sides going in level at the break, 2-7 to 1-10.

Cork got the upperhand at the start of the second half with the first three points and it took Tipp until the 40th minute to register again through the lively Andrew Ormond. Tipp would proceed to take control and went two behind going into the dramatic final minutes, looking like they had lost it before Morris saved them with his late, late strike.