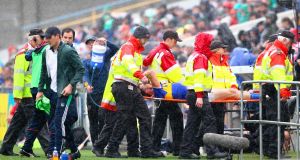 ‘Bonner’ fell awkwardly during the first half of Tipp’s win over Limerick on Sunday, their fourth win in as many matches to top the round-robin series and qualify for the Munster final. However they’ll progress without the leadership, and relentless workrate of their experienced half-forward, after confirmation of the injury to his right anterior cruciate ligament.

The 29 year-old has two All-Ireland medals, and as many All Star awards. The injury will rule him out for at least the rest of the 2019 season. Maher is renowned for his high fitness levels and his commitment, both of which will significantly help in his road to recovery.

Defender Cathal Barrett also limped off in the opening half of the win over Limerick, with what appeared to be a hamstring complaint, and he will undergo a scan later on Tuesday evening to access the extent of his injury. Tipperary are expected to release an update on the results of such later on Tuesday night.

The Munster hurling final against Limerick is on June 30th.