GAA Statistics: How much has Gaelic football changed in the last decade? 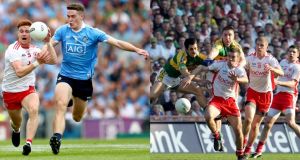 Action shots from the 2018 and 2008 All-Ireland football finals. Photographs: Inpho

My advice to Tyrone fans still reeling from last Sunday’s All-Ireland final defeat to Dublin is to watch the 2008 final, it's on YouTube. It was an absolute classic of an encounter, which of course Tyrone won.

It may have only been 10 years ago but football was a lot simpler back then. Kerry kicked 20 long balls into their full forward line that day – the ‘twin towers’ of Kieran Donaghy and Tommy Walsh were in there – but won only four of them. It was more exciting than efficient, but perhaps a varied approach could’ve helped unlock the Dublin defence on Sunday?

In the second half last weekend Tyrone lumped in five balls and a positive outcome accrued on three occasions. Three of the five goals Dublin conceded in the 2018 championship were the result of long balls.

It doesn’t seem that long ago that Seán Cavanagh and Colm “Gooch” Cooper were running riot – the two top scorers for their respective teams in the 2008 decider – but it was a decade ago. And football has changed so much that not a whole pile of what happened back then relates to the modern game at all.

Much of the talk in the build-up and follow-up to this year’s decider centred on Dublin’s possession-based game. Their possession count has been as high as 63 per cent this summer (against Donegal in the Super 8s) and it averaged out at 55 per cent in their seven matches leading up to the final. They matched that total last weekend, and it resulted in a six-point victory.

Ten years ago, however, possession was not quite as important. Or rather, teams were not as clinical or focused on maximising every ounce of it. Tyrone won the 2008 final with just 46 per cent of the possession – in a match where the ball was in play for just under 31 minutes. In the Super 8s opener between Dublin and Donegal it was in play for 47 minutes and the least amount of time it was in play for in any of Dublin’s matches was 39 minutes.

Jim Gavin’s team made 244 passes against Tyrone. Only 54 of them were kickpasses. 78 per cent of Dublin’s passes were made with the hand. The handpassing figure for Tyrone and Dublin combined was 75 per cent.

The most telling possession comparison, however, comes in terms of the number of consecutive passes. The highest number of passes in a single play in the 2008 final was nine. On only six occasions did either team make more than five consecutive passes. This year Dublin made 29 passes in one run of possession – which ended with Brian Fenton’s second point. Tyrone managed 16 at one point in the first half.

During Dublin’s hugely impressive four-in-a-row, the likes of Ciarán Kilkenny have demonstrated how a handpass is often the more fluid and effective option in both retaining the ball and transitioning from defence to attack after a turnover. However, watching the two matches back-to-back it is noticeable how many short handpasses are given when a kicking option would’ve previously been created, expected and even forced.

The careful build-up has led to a drop in excitement for some, but for others a lower error count has made for a higher-quality spectacle. This year’s final was the highest scoring since 2006 and recent finals and semi-finals have produced thrillers aplenty. But there is no denying that the risk factor in general play has been largely diminished and it does beg the question - what will things be like in another 10 years when coaches insist upon even fewer mistakes?

An improvement in the conversion rate from possessions to scores has been a by-product of this mentality and approach. Tyrone and Dublin between them had a combined 89 spells of possession on Sunday, with an end result of 34 scores. So, almost two in every five times a Dublin player got himself on the ball and played a pass, the move he began ended with a score.

However no aspect of football has changed more over the past 10 years than the kickout – and it's now more important than ever.

In the 2008 All-Ireland final there were only nine attempted short kickouts. The Kerry and Tyrone goalkeepers between them kicked out 37 contestable restarts. Of them only four were caught cleanly – all by the Kingdom’s No 8 Darragh Ó Sé.

Writing in his Irish Times column this week, the four-time All Star referred to Dublin’s midfield general Fenton as being well on his way to becoming one of the game’s best ever midfielders. The Raheny clubman though is facing a very different midfield challenge than Ó Sé did. In Sunday’s final he only contested three kickouts in the air. There were only 10 contestable balls kicked out around the middle in the entire game.

As usual, Stephen Cluxton was supreme and Dublin won all but two of their 31 restarts. Tyrone scores came off both. Tyrone won 75 per cent of their own kickouts, with Dublin’s zonal press forcing the interception which resulted in a crucial penalty in the first half.

The zonal press - whereby the forwards and midfielders each cover an area of the pitch rather than just mark their man - was unheard of and totally unnecessary 10 years ago. Nowadays (when implemented correctly as Dublin do) it reduces the margin of error for 'keepers who need to stay calm and kick precisely between the lines, or go longer.

So it’s clear possession, kickout retention and conversion rates have all taken on a whole new meaning over the years – but as for excitement? Well Tyrone fans will certainly know which final they’d prefer to look back on anyway.

Eddie Jones says he can’t guarantee England players will follow Covid-19 rules 06:55
Drogheda in the driving seat as Division One reaches a thrilling finale 06:00
Regionalisation may be the key as league adjusts to new reality 06:32
Damien Comer to miss another Connacht championship following hamstring injury 06:00
Ireland's centre will hold thanks to Henshaw and Aki’s midfield muscle memory 06:00
Crossword Get access to over 6,000 interactive crosswords