My ‘Underdogs’ diary: Rough beauty of the GAA trial 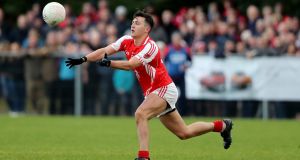 TG4's Underdogs series follows the journey of some of the best club players from around the country as they prepare to take on a county team. To be eligible players (over 18) must have never previously played intercounty senior championship football. It begins at 9.30pm on Thursday . . .

This Thursday the first episode of TG4’s Underdogs series kicks off with a trial. As all GAA seasons should do.

A few days before that very first trial I met an old DCU freshers team-mate at a bus stop. He’d been a regular on our All-Ireland winning team seven years ago, and the Sigerson team, and had played county underage. I was shocked when he told me he’d never since got a sniff of making his county’s senior panel. His club have really struggled, and there’s no trials anymore, he explained. It’s a tale I’d hear on repeat over the coming weeks as my Underdogs journey began.

For this particular player, the TV requirements of the show were enough to put him off putting his hand up. And even for a journalist, as brilliant as the experience has been, it certainly did take getting used to practically everything you do being on camera. It’s not for everyone and there’ll be a few cringey moments watching back no doubt. They’ll be well worth it though.

The first episode shows us battling to stand out and make the initial squad – in Celbridge, Trim and then Abbotstown. It’s there we were each put in front of the selectors to await a yes or no.

Like any trial, you’re putting yourself out there to make it, or not. Only in this particular trial, not making it is captured on TV. I take my hat off to those who were cut because it took bottle to apply. It’s a huge footballing opportunity and a great experience, and loads will be watching thinking I’d have liked to, but these showed up.

It’s a rough business, but isn’t it sad that trials now seem to be a thing of the past at senior level?

Pat Gilroy bucked the trend this year and held a number of trials for the Dublin hurlers, any no-shows was an indication of a lack of interest. And what better way of testing a lad than creating a pressure situation against players of a similar standing. Which isn’t always the case at club level. And so the trials allowed us all an equal opportunity to show our best and lay down an early marker.

Aside from the football, one of the big things on day one was meeting the three selectors – Valerie Mulcahy, Ray Silke and Paul Galvin.

Mulcahy has won no fewer than 10 All-Ireland medals with Cork, and having only recently retired she is in tune with the modern game. Her focus is on the skills and finer details and she’s always willing to offer feedback.

Silke is an All-Ireland-winning captain, with Galway in 1998, and he’s a massively positive individual. A great example for us players to have of a team leader – one who ended a 32-year wait for Sam Maguire in his own county – and can hopefully help get the best out of our bunch too.

While working with Kerry’s three-time All Star Paul Galvin is one of the highlights of the series for me. He has a rare ability to make his point and the game in general seem so simple. His love for the ball is infectious, and to a man the squad hangs on his every word.

Most importantly, as everyone will see over the next few weeks, all three are ego-free and honest. They genuinely seem to want to create a fair and competitive environment for every player and the team to reach their potential. And when you’ve got that, everything else is a by-product.

There are some really talented players involved too, and played early morning on some of the hottest days of the summer, the trials were competitive. There's lads who've played for their county junior teams, played at the various underage grades, or have even featured in the national football league but never quite got the nod to play senior championship. Fantastic players and many fantastic characters too – and some of them have their own important stories to tell.

From Kerry, Dublin, Mayo, Galway, Derry, all over. The mix of counties is one of the funniest dynamics of it all – a team of lads from such a range of different places, with different backgrounds, accents, and banter – but all sharing the same addiction for that shiny O’Neills. The WhatsApp is not for the fainthearted I tell ya.

In realtime we’re a few camps in and none of us have a clue what’s going to be shown on Thursday’s show. But like 14 years ago, when the programme's most famous son Kieran Donaghy first made his name, we’ll be watching. Just this time very oddly watching ourselves.

Tommy Walsh knows Kerry will be judged on the summer and nothing else 05:00
Jürgen Klopp believes Jordan Henderson can improve further 22:30
Burnley end 58-year Old Trafford drought to deepen United’s woes 22:21
Steed has the last word as IT Carlow reach their first Sigerson Cup final 22:02
Son pops up late to seal vital three points for Spurs 21:50
Crossword Get access to over 6,000 interactive crosswords