GAA Statistics: How important is it to play county minor and U21? 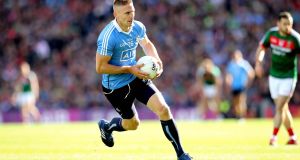 It’s been a long, and for some players more than others, a winding road to Croke Park for the All-Ireland senior football final.

The Dublin and Tyrone players in Sunday week’s decider have won 13 underage national titles and 31 provincial titles between them. They have together set the standard in underage football since the turn of the millennium - abeit Tyrone more so at minor and the Dubs at Under-21. Their appearance in GAA HQ on the first weekend of September is by no accident.

Dublin’s five-time All Star goalkeeper, Stephen Cluxton, is the oldest player who’ll feature in the weekend after next’s football decider. The 36-year-old won a minor Leinster title in goal for Dublin in 1999. Since then, Dublin have won eight Leinster minors and an All-Ireland in 2012. From the following year (when he became an Under-21) onwards, they’ve won five Under-21 All-Irelands and 10 Leinsters.

Between the two grades only Tyrone have won more All-Ireland titles in that time frame, with seven (three Under-21 and four minor).

Tyrone have 13 combined provincial titles (Under-21 and minor), the same number as Galway, two less than Kerry, Cork have won 16, Mayo 17 and Dublin 18.

Of the Dublin players who featured in the Super8s round-robin series, they have between them 17 Leinster minor medals, four minor All-Irelands, 42 Under-21 Leinster medals and 23 All-Ireland Under-21 medals. Of those players who did play minor and Under-21, the only players not to have won underage silverware are Paul Flynn, Philly McMahon, Darren Daly, Michael Dara Macauley and Kevin McManamon.

But how important has underage success been on the two counties’ journey to the biggest day of all? How many of the players who’ll be battling it out for Sam Maguire on Sunday week even played underage football for their respective counties?

Well, of the Dublin and Tyrone players who featured in the round-robin series – there were 31 Dublin players and 24 Tyrone players used – only three of them did not represent their county at either Under-21 or minor.

They were Tyrone’s Harry Loughran, and Dublin’s Eoghan O’Gara and Michael Fitzsimons. Both of the latter two made their names during Dublin’s junior All-Ireland winning campaign in 2008, a team which also contained Denis Bastick, Johnny Cooper and Darren Daly.

Along with Loughran, O’Gara and Fitzsimons - Shaun Patton from Donegal and Monaghan flyer Karl O’Connell make up that list. Patton was focusing on his soccer aspirations at the time, and similarly O’Connell with his athletics commitments. Now one of Malachy O’Rourke’s key players, O’Connell only began playing gaelic football when he was 17.

Kildare’s David Slattery played Under-21 hurling, and only got his football breakthrough aged 27. Neither of Roscommon’s Padraig Kelly or Gary Patterson featured in championship underage squads. The latter featured for his club’s intermediate Connacht winning team in 2017, and Kelly is from the St Brigid’s club. Kerry’s Ronan Shanahan made his name playing for Austin Stacks. Ciaran Duggan had trials at underage level but never made a Galway panel until senior level, he was man of the match in the quarter-final win over Mayo this year and started at midfield in the All-Ireland semi-final against Dublin. Corner back Declan Kyne also played no football for the Tribesmen at minor or Under-21, instead showing his qualities for the county’s junior team.

For Dublin, only five players do not have experience at the minor grade. They are Brian Fenton, Bernard Brogan (those two have six All Stars between them), Kevin McManamon, O’Gara and Fitzsimons. Along with Loughran who played neither, Tyrone's Conall McCann, Connor McAliskey and Declan McClure all played Under-21 for Tyrone, but not minor.

Across the eight Super 8 counties, only 26 players did not play minor football, that’s 13 per cent of them. Those players however included Monaghan’s talisman Conor McManus and fullback Drew Wylie, Kerry All Star Paul Murphy and Galway powerhouse Damien Comer.

All of the teams who made up the new quarter final series have built on the groundwork of underage success, except one. Monaghan have only two Ulster minor medals and two u21 Ulster winners in their squad of players who featured in the round-robin. Their minor title in 2013 however was a first for the county in 68 years, and their u21 in 2016 was only their third ever - lest we forget Monaghan is the county with the fourth smallest population in the country.

They may have picked senior midfielder and Irish international rules player Darren Hughes in goal on their minor team in 2005, but they’ve certainly been making far better decisions at senior level.

So while Dublin and Tyrone pockets are steeped in All-Ireland minor and Under-21 medals, late developers worry not. For those Kerry and Galway players watching on from home next weekend, having missed out on making their county minor squads, greatness may still lie ahead at Under-21 and senior. Although the odds aren’t exactly in the favour of players or counties who do not succeed at underage.