Boss staying on despite Buckley, McEntee and Burke all stepping away 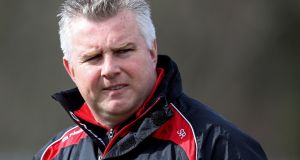 Stephen Rochford: was granted a two-year extension to his term as Mayo manager last October, bringing him to the end of 2020. Photograph: Tommy Dickson/Inpho

Mayo manager Stephen Rochford is still in the process of pulling together a new management team for the 2019 season.

The Crossmolina man met with Mayo County Board officers on Friday last for their first formal meeting after Mayo’s exit from this year’s championship last June.

Rochford had told county board chairman Mike Connelly earlier this month that he would be remaining on. However, he must find an almost entirely new management team after Donie Buckley, Tony McEntee and Peter Burke stepped away.

Rochford and fellow Crossmolina man Joe Keane are the only two members of the 2018 management team remaining in situ. Connelly said they will meet Rochford on September 3rd or 4th for a further update.

While Rochford’s initial three-year term brings him up to the end of his season, he was granted a two year extension to his term last October, bringing him to the end of 2020.

“He still has to put together a backroom team and he’s hoping to have that done by the end of next week so that’s where it’s at,” said Connelly.

“Stephen is there, he is the manager. What has changed is three of his team have stepped down. He has to get new management so I suppose when that happens we will discuss all that and take it from there,” added Connelly.

While there has been plenty of speculation locally about potential newcomers, Connelly said no prospective candidates were discussed last Friday for fear those name(s) may leak into the public domain.

“I said ‘when you have them [names] on your ticket, put them on the table’ so that’s where it was left,” said Connelly.

He said a high quality manager and management team is key.

“Absolutely. And I think that would be Stephen’s take on it as well. He wants good people as well because he wants to be successful,” he said.

Five board officers met with Rochford on Friday night at MacHale Park and the same five officers met with a delegation of three Mayo players on Thursday night. The players in question were 2018 captain Cillian O’Connor and vice-captains Tom Parsons and Aidan O’Shea.

Connelly said the meeting with the players was an annual review required for every county. He said they reviewed the year, discussed the future and described it as ‘a good meeting’. He said the players would have no input into the formulation of the management team.