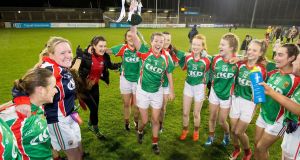 All-Ireland senior women’s club football champions Carnacon will not be able to defend their title following the shock decision to remove them from the Mayo club championship.

That sanction was taken at Tuesday night’s monthly meeting of the Mayo Ladies Football County Board in Castlebar after the withdrawal of all eight Carnacon players from the Mayo senior ladies side in July.

Eight Carnacon players and four players from other clubs left days ahead of Mayo’s clash with Cavan. Two selectors also stepped aside. A Carnacon representative told Mayo manager Peter Leahy that all of their players were withdrawing from the panel.

The departing players cited “player welfare issues that are personal and sensitive to the players involved” as their reason for withdrawing.

Among those to leave were 11-time All Star Cora Staunton and Mayo captain Sarah Tierney.

Tuesday’s meeting of the board in the TF Hotel in Castlebar ruled that Carnacon brought the game into disrepute, citing Rule 288 of the Ladies Gaelic Football Association Official Guide.

That rule states that: “Any member of the Association found guilty of conduct calculated to bring the Association into disrepute shall be liable to expulsion or suspension by the Committee, Board or Council concerned.”

Mayo Ladies Gaelic County Board secretary Kevin McDonnell said “it was the feeling of the meeting that some action needed to be taken”.

Delegates and officers voted 29 to four that Carnacon had brought the game into disrepute; and voted 26-2, with a number of spoiled votes, to remove them from senior league and championship involvement in 2018.

McDonnell said the other four players who left were not sanctioned as they “left of an individual nature for personal reasons’ whereas Carnacon “withdrew their services”.

“That is what it was seen by the meeting as having brought the game into disrepute. It was the action of the club rather than its players,” he said.

Carnacon club secretary Beatrice Casey confirmed that a meeting will take place on Wednesday night to discuss the matter and prepare a statement but confirmed they will be appealing the decision.

She also stood by the club’s decision to withdraw their eight players from the Mayo squad last month.

“Our girls had genuine concerns and genuine issues that they felt were being overlooked and that’s why we got involved as a club,” she said.

Carnacon received the notification on Wednesday yesterday afternoon and have five days to appeal to the Connacht Council.