Peter Duggan 'close to quitting' before stellar season with Clare 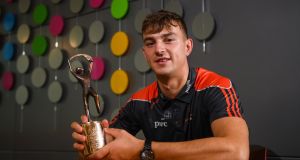 Clare’s Peter Duggan with his PwC GAA/GPA Player of the Month award. “The enjoyment is coming back into it.” Photograph: Sam Barnes/Sportsfile

Without once surrendering his warm and chirpy smile, Peter Duggan sits down and talks at length about the pain of losing to Galway, the joy at seeing Limerick win, and how close he came to quitting the Clare panel before this year. Here, in other words, is one happy hurler.

Duggan turns 25 next month, his final championship tally of 3-76, from eight games, one point more than the next-best, Joe Canning. That’s some consolation – plus being named PwC GAA/GPA Hurler of the Month for August – only, for Duggan, this is also the season that might never have been.

First called up by Davy Fitzgerald in 2012, while still in school, and on the panel for their 2013 All-Ireland success, this was first summer he nailed down a starting place, and Duggan traces all that back to making the county final with Clooney, last October.

“This was my seventh year doing intercounty hurling and I was always just on the fringes.” he says. “I ended up having a good year with Clooney last year, and getting to the final, and I thoroughly enjoyed it. We were a great, close-knit group in Clooney and I just really, really enjoyed the whole year.

“I remember ringing the brother [Martin] and going, ‘Naw, I’m just going full hog, everything at it this year,’ because I had a bit of confidence going into the year, whatever it takes, just go and do it.”

For better or for worse, he didn’t tell Clare joint managers Donal Moloney and Gerry O’Connor just how close he was to quitting. “I don’t think we even had a chat about it. This is probably news to them. The whole thing was I was on the panel for so long, and never really breaking on. Obviously next year is a fresh place, and I mightn’t make my place again, but it’s a lot easier to go back now that I was starting.

If we didn’t go so well with Clooney I don’t think I would have gone back. It was just an extra motivation

“And I was close to quitting the year before, close on a few occasions. No reason, other than I was just a bit burnt out during the year, a long year. I wasn’t on the panel for the Limerick game last year, and I just wasn’t going great. I just found it hard to get motivated.

“If we didn’t go so well with Clooney I don’t think I would have gone back. It was just an extra motivation, had the confidence to stay going, and that’s why I stayed going. It could have been every easily not gone back.”

He initially expected to find himself rooting for Galway on Sunday, but that soon turned to Limerick once the ball was thrown in. And, as with his own season with Clare, he could sense Limerick were enjoying themselves.

“I think it’s because the games are so closer together, you’re not training as much. There’s not as much heavy training sessions, so you’re kind of going in and you’ll have a bit of a puck around and that. In general most lads love the puck around before training, you’re doing the cross bar [challenge] . . . you’re trying to hit the cross bar, you’re hitting sidelines, messing around, so that part . . . I think that’s why the enjoyment is coming back into it. We’ll say like last year you mightn’t be playing a game for five weeks so you’re talking about four weeks of animal training where you’re trying to get fit again, fit again, fit again, whereas this year you’re in and you’re playing a game every week.

“So that Tuesday night you’re all focusing on recovery and getting your body back right. So you’re not kind of being dogged with running and that. It would end up that I’d go out an hour early and I’d be hitting frees and messing around hitting sidelines and things like that. You’d be mingling around with everyone. I think that’s why the enjoyment factor is back because it’s less hard training. People don’t mind going to training as much.”