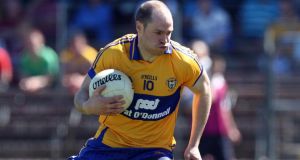 GAA president John Horan has led the tributes to former Clare footballer Michael O’Shea, who has passed away at the age of 37 from cancer.

A member of An Garda Síochána, O’Shea is survived by his wife Orlaith and daughter Éirinn, parents Joe and Elizabeth, his brother John and sister Oonagh.

“On behalf of the Association I wish to extend our sincere condolences to the family of Michael O’Shea on his recent passing,” said Horan.

“Michael was someone who embodied everything positive about the GAA. His commitment to his county’s cause was unflinching and saw him serve with distinction for 15 years, an incredible career of service and one made all the more significant coming in a county that did not always enjoy big days out at Croke Park.

“After his playing career was over he immediately went about giving back and was immersed in club coaching. The tributes paid to him from team mates and colleagues speak volumes about the calibre of a man we were lucky to have involved in our games.

“He leaves a void in Clare football and in St Senan’s, Kilkee but mostly with his family and friends, with whom we offer our sympathies.