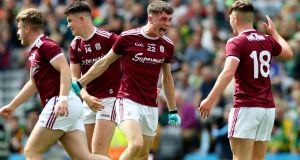 As Brian Hanley wrapped up his post match media duties after guiding the Galway minors to All-Ireland hurling success, he referenced the county’s young footballers.

“Our hurlers have had this for the last number of years and God willing the footballers can experience it too,” said Hanley after guiding Galway to a third minor win on the trot.

A dream double is on the cards for Galway and if Donal O Fatharta’s footballers can pull it off, it would be a first ever clean sweep of minor titles by the county. Only Dublin, Cork and Tipperary have previously managed to win both in the same year.

Cork are also aiming a double of sorts for having recently captured the All-Ireland U-20 title in such dramatic circumstances by beating Dublin.

Galway will hope that vital All-Ireland final day experience gathered by a number of their key minor players from 2018, when they lost to Kerry, will stand to them.

Goalkeeper Donie Halleran and attacker Daniel Cox started that 0-21 to 1-14 defeat to Peter Keane’s Kerry and are retained in the current team. Wing-back Cian Hernon and in-form full-forward Tomo Culhane also came on in the 2018 final while Niall Cunningham, who came on in this year’s semi-final win, was an unused sub in last year’s final.

Culhane was terrific against Kerry in Galway’s one-point semi-final win and with Hernon contributed a total of seven points.

They were crucial contributions in a low-scoring arm-wrestle of a game that Galway won by 0-14 to 0-13. That win alone was monumental for Galway given that Kerry had won their previous 34 games at the minor level, a remarkable run that stretched back to their previous defeat at the quarter-final stage in 2013.

Galway may feel a little stung with commentary afterwards that Kerry had tossed away the game, kicking 13 wides and blowing a string of opportunities late on. In the end, it was a stoppage-time point from substitute Darragh Kennedy that separated the teams.

Cork were more convincing in their semi-final win over Mayo, surging ahead with a seventh minute Patrick Campbell goal - he later went off with a back spasm that may threaten his final involvement - and adding three more majors to run out eight-point victors.

Cork manager Bobbie O’Dwyer admitted the success of the county’s U-20 team has inspired his minors, many of whom are just 16, throughout the summer.

We imagine that it was a timely injection of confidence because the Cork players’ morale must have been dented by their terrible start to the summer. The opened their Munster campaign in early May with a 3-19 to 1-9 loss to Kerry.

“That was a sore place to be in Pairc Ui Rinn that night alright,” acknowledged O’Dwyer, whose team has ultimately outlived Kerry in the minor championship despite losing twice to them.

There is another curious aspect to the final pairing in that both are beaten provincial finalists and both have gone to win All-Ireland semi-finals against the team that beat the other. In Galway’s case, they beat a Kerry side that got the better of Cork in the Munster final while Cork stuck 4-12 past a Mayo team that previously beat Galway in the Connacht final. What all of that means is anyone’s guess. Our best attempt is that Galway will complete the job, just about.