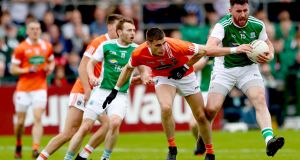 Grimley was lined following an incident with Erne marksman Seamie Quigley, and Fermanagh surged clear with four unanswered points to lead by 0-10 to 0-4 by the 45th minute after leasing 0-6 to 0-4 at the interval.

Armagh threw on their talismanic team captain Rory Grugan, who was unable to start, and he quickly nailed two frees to narrow the gap to four points.

But they hit six bad wides in a brave bid to get back on terms with a total of 12 over the entire game.

Fermanagh settled swiftly and had the Armagh defence in all sorts of bother with their swift breaks from defence.

And they had a great chance of an early goal when Seán Quigley struck the upright and the ball fell kindly for his brother Séamus whose point-blank shot was brilliantly smothered by Armagh goalkeeper Blaine Hughes.

But Quigley made amends when he converted an acute 21-yard free to open the scoring.

Armagh were under siege and Fermanagh’s impressive centre forward Declan McCusker arrowed over a second point.

Armagh replied through the bustling Mark Shields in the sixth minute before Barry Mulrone hit the point of the match and this was added to by towering midfielder Ryan Jones to put them into a 0-4 to 0-1 lead by the 10th minute.

But with Paul Burns and Ethan Rafferty prominent, Kieran McGeeney’s side got back into the match, through a well struck free from 45 metres from Rafferty.

Rafferty repeated the dose and then Armagh had a “point” somewhat controversially disallowed as Connaire Mackin’s shot was ruled to be wide.

Both sides were guilty of some very poor shooting with the Quigley brothers misfiring for Fermanagh.

But it was the Orchard County who won the wides battle on an eight to six tally as referee Neilan handed yellow cards to Armagh’s Ben Crealey and Fermanagh’s Eoin Donnelly. And Armagh mentor Paddy McKeever was sent to the stand.

The final quarter of the opening half was tense with Jones and Séamus Quigley on target for Fermanagh with Gavin McParland replying for Armagh.

Fermanagh were well worth their 0-6 to 0-4 interval lead and looked to be in a good position as they turned over with the breeze in the second half.

And they certainly stamped their authority on this game in the second half where Séamus Quigley reigned supreme.

1 Six Nations: A 21st-century tournament that saw Irish rugby come of age
2 Owen Doyle: Creeping professionalism of schools rugby a threat to the game
3 In Donegal Michael Murphy is seen, simply, as a godsend
4 Six Nations: Ireland are contenders but England still the team to beat
5 Mike Catt hopes to have Irish backs purring in Six Nations
Real news has value SUBSCRIBE

Clare ease into action with 16-point thrashing of Carlow 18:03
Kilkenny give an early glimpse of their power to see off Dublin 17:53
Five-star Mark Wood sets England towards Wanderers win 17:45
John Heslin strikes at the death to see Westmeath past Clare 17:35
Man United find respite in the mud as they hit Tranmere for six 17:32
Crossword Get access to over 6,000 interactive crosswords