GAA weekend that was: Wicklow have grounds for complaint 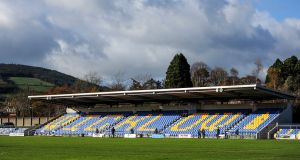 Wicklow are frustrated that they can’t play their home quarter-final against Dublin in Aughrim. Photograph: Inpho

Maybe it was Parnell Park asserting its value to Dublin but the close-run thing against Kilkenny came a bit out of the blue. The first championship fixture between the counties at the venue in 20 years yielded Dublin’s third-best result in 12 meetings.

This was after contrasting leagues in which Dublin were hammered in the quarter-final (coincidentally when the match was switched because of weather from Parnell Park to Croke Park) by Tipperary, whom Kilkenny beat in the final.

It was also interesting to see Kilkenny field seven debutants. The deficit in experience perhaps was another factor in a match that Dublin looked to have won even up until injury-time but there were echoes of 16 years ago when manager Brian Cody, then in only his fourth year, played four rookies in the first championship match of 2002, against Offaly.

During that year’s league, the Kilkenny manager had reacted to the previous season’s chastening All-Ireland semi-final defeat against Galway by bringing in a range of new players. Having won the league, Cody stuck with a number of the newcomers.

His judgement was vindicated with a nine-point win over Offaly from where the team went on to complete the double, defeating champions Tipperary in the All-Ireland semi-final and Clare in the final.

Two of the four championship rookies - current selector Derek Lyng and Martin Comerford - ended the year as All Stars: all in all, a tall order for Sunday’s debutants to emulate even if they have started the year similarly with the league title. SM

The biggest turn-up of the championship so far was Wicklow’s first win in Leinster since 2013. Having finished bottom of the entire league, John Evans’s side were rank outsiders but came through strongly to out-score Offaly 1-6 to 0-4 in extra-time, having pulled back a three-point deficit.

For the victorious manager, the result didn’t come as too much of a surprise. “We played three or four challenges and our scoring had been improving all the time.”

He also criticised the decision to fix the quarter-final match with Dublin for Portlaoise, as it is now a home fixture for Wicklow.

“Before we won, it was all fixed for O’Connor Park if Offaly had won. It’s all a bit financial I think. It’s the best team in the country against the lowest-ranked and I think Dublin like to travel.”

A spokesperson for Leinster Council said that the matter had been decided a year ago.

“The Slattery report puts the capacity in Aughrim at 7,000 and there were 13,500 at the Dublin-Carlow match in Portlaoise. Season ticket holders are also guaranteed a seat at matches and there 3,000 in Dublin but only 2,000 seats in Aughrim.

“The overriding reason though is that last year the Leinster Management Committee decided that Dublin could realistically play championship in only four grounds in the province: Croke Park, O’Moore Park (Portlaoise), O’Connor Park (Tullamore) and Nowlan Park (Kilkenny).” SM

Trading places not showing a profit for Cavan

For such a promising match-up, the end result felt strangely tame, even by the sometimes censored standards of Ulster football. Donegal against Cavan in Ballybofey provided a little foreplay but not much proper action, not when it looked all over before half-time, and turned out that way too.

For teams arriving in the opposite direction - Donegal relegated from division one, Cavan rising back up - it went against the flow too, as at no point beyond the opening half hour did Donegal appear threatened. Cavan, in contrast, looked nervous and lacked confidence, the eight-point defeat in the end no less than they deserved.

Donegal finished like a team in this for the long haul, possibly as well-equipped too since the already halcyon summer days of six years ago.

Captain Michael Murphy was leading from example at midfield, and Paddy McBrearty eventually found his Midas touch late in the second half, and while Ryan McHugh was relatively quiet, there was plenty about the taste of the next generation - Michael Langan, Paul Brennan, Stephen McMenamin - to excite manager Declan Bonner, and rightly so.

With names like Odhrán Mac Niallais and Paddy McGrath to come back they’re only going to get stronger.

Ironically their quarter-final date against Division Four side Derry may prove a little trickier for Donegal, or certainly a little tighter. When 2-17 of Donegal’s 2-20 on Sunday comes from open play, Cavan have something to answer for, especially with McBrearty so quiet early on, beyond two open goal chances.

But given their lighter side of draw, with Monaghan and Tyrone tucked away on the other side, Donegal came away with plenty of encouragement and confidence too. They may not get to play such attractive or open football again in the province, but they can certainly fancy their chances of making another Ulster final. IO’R