Carlow ‘heading for the Super 8s’ after Louth win 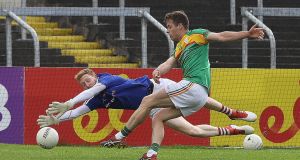 Carlow’s dream season is entering the realm of fantasy, and even Turlough O’Brien seemed to get caught up in the euphoria as he declared they are ‘heading for the Super 8s’.

That bold prediction may have been made tongue-in-cheek, but the Carlow manager’s giddy enthusiasm was completely understandable, as his team followed up promotion to Division 3 with a hugely impressive 11-point dismantling of Louth in O’Moore Park.

Their respective league form suggested this could be a banana skin for Pete McGrath’s struggling side and a real opportunity for Carlow, but few could have predicted just how easy it would be for the brilliant Barrowsiders.

After a nip-and-tuck opening half hour, they went on the rampage, plundering 2-10 and conceding just three points in an impressive 40-minute power surge.

The goals arrived in quick succession in the final 10 minutes, and summed up just how disheveled Louth had become in an alarmingly one-sided second-half.

Diarmuid Walshe fired home the first and the superb Paul Broderick followed up with the second less than three minutes later.

The strikes added the gloss, but Carlow were already in cruise control at that stage, and heading for a derby showdown with neighbours Kildare,

They had to battle to exert their supremacy in the first-half as Louth appeared to have put a dismal Division 2 campaign behind them, but confidence was obviously brittle in the Wee County camp and after opening a 0-9 to 0-7 lead in the 28th minute they completely lost their way.

Carlow kicked the last three points of the half to lead 0-10 to 0-9 at the break and O’Brien wasn’t surprised by the manner in which his side took control of the contest in the second-half.

“Our first-half performance was good, we had 10 points on the board, we kicked seven wides and dominated possession,’ he said. ‘And we just pushed on in the second-half. We stuck to our game plan very well, worked our scoring opportunities patiently and opened them up.

“We’re progressing year on year now. We didn’t want to be one-hit wonders last year so we’ve shown here today that we’re not. We’ll get the heads down again and we’re looking forward to playing Kildare in the next round.”

A harsh enough black card for the experienced Derek Maguire in the 24th minute wouldn’t have helped Louth’s cause and they lost Ryan Burns to a straight red in injury-time to add to their gloom.

To say McGrath was downbeat afterwards would be an understatement and the Down legend even hinted that his stay south of the border could be a brief one.

“When you lose a match like that and you feel, not only disappointed, but devastated, you don’t regret [taking the job] but you do say to yourself ‘I’ve made better decisions in my life’.

“But we’ll go on and see what the rest of the season holds. We’ll sift through the carnage and the debris and man-up for whatever lies ahead in the qualifiers.”