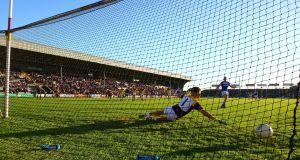 Trailing by 10 points at half-time, Laois had to call on all their mental strength in an amazing second half to bring this game to extra time and eventually emerge with a six-point victory over a gallant Wexford in the first round of the Leinster football championship.

It was the half-time switch of Donie Kingston to a full-forward role that transformed the Laois revival but they still had to wait until the second minute of extra-time to take the lead for the first time. All told, they showed remarkable resilience to set up a second round clash with Wetmeath.

Wexford came into this game as rank outsiders, but the manner which they controlled the opening 35 minutes pointed to a shock. Laois struggled, even when in possession, and kicked five wides in the opening 19 minutes. They had to wait until the 23rd for their opening score, by which stage Wexford had stormed into an eight point lead. Indeed such were Laois’ struggles they failed to score from general play throughout the first half although it must be side that home keeper Conor Swaine denied them goals on three occasions with superb stops.

Wexford football may have been in the doldrums following relegation to Division Four of the league but manager Paul McLoughlin had them composed and up for the battle, as they followed up a bright opening with some excellent points.

They went 0-3 to 0-0 in front after just four minutes through points from Daithi Waters, John Tubritt and Glen Malone and a Donal Shanley pointed free extended that lead even further. While Wexford looked good throughout this period of play, it took a superb save from keeper Swaine to deny David Conway, who was put clear in on goal by a superb Ross Munnelly pass.

Laois became even more unsettled after the miss as Wexford moved up through the gears and further points, two frees from Shanley and a brace from Tubritt, saw them lead 0-8 to 0-0 after 21 minutes. Two minutes later a pointed Gary Walsh free opened the Laois scoring, and when Munnelly added another shortly afterwards a revival looked on the cards only for erratic shooting to prove costly.

Instead, Wexford kicked on when Neamhan Rossiter initiated a move out of midfield, with the ball transferring through several players before arriving back to Rossiter to find the back of the net. Laois could only manage a further Munnelly pointed free in between scores from James Stafford and Shane Doyle which left the homeside with a 1-10 to 0-3 interval lead after a hugely impressive opening half.

Laois served early notice for a second half comeback with Donie Kingston now playing havoc in a deep inside forward role and quickfire points from Stephen Attride and David Conway set the tone for an amazing comeback. With Kingston and Shanley exchanging pointed frees, Munnelly followed up with two further points before Kingston hit another three scores of his own. He then converted a 69th minute penalty to bring the sides level, 1-14 apiece.

The drama was unrelenting as Wexford roared back to the attack with Brian Malone brought down as he drove in on goal in additional time, Shanley opting for a point from the penalty spot. With Laois facing down the barrel of a shock defeat, the visitors mustered one last desperate attack which saw corner-back Gareth Dillon bringing the sides level again and forcing extra-time.

Laois went on to dominate extra-time, a Benny Carroll goal three minutes in setting them on their way to completing a comeback for the ages.

1 Ireland 23 Georgia 10: How the Irish players rated
2 Ireland grind their way to grisly win over Georgia
3 No fireworks but Limerick get the job done against Galway
4 Jim McGuinness: There is a way to save championship and make it competitive
5 Neil Lennon defiant after Ross County shock Celtic
Real news has value SUBSCRIBE