Despite finishing the game with 13 men, the Royals were too strong for Westmeath 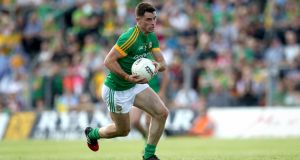 Donal Keogan helped set the tone for Meath with a goal after 21 minutes, finishing off a terrific move. Photograph: Ryan Byrne/Inpho

Despite finishing the game with just 13 men, Meath proved too strong for their neighbours Westmeath in a disappointing O’Byrne Cup final played in front of a big crowd in Mullingar on Sunday afternoon.

The sides were tied at 0-3 apiece after a low-key opening quarter of an hour.

In the 21st minute, a great move by Andy McEntee’s charges ended with centre-back Donal Keogan rifling the ball past Stephen Gallagher (who despite the concession of four goals pulled off a number of great saves throughout). A well-taken goal by the best player on view, Donal Lenihan, put the Royal County 2-3 to 0-4 ahead with 23 minutes elapsed.

Two minutes later, midfielder Paddy Kennelly was sent off after picking up his second yellow card. Shortly afterwards, Callum McCormack goaled at the second attempt for Colin Kelly’s troops, but Meath still led by 2-7 to 1-7 at half-time.

Lenihan, whose choice as official “man of the match” was no surprise after a personal haul of 2-8, pounced for his second goal in the 41st minute and Meath never looked in the slightest danger of being overturned thereafter. A straight red card for substitute Eamon Wallace in the 62nd minute, after he had seen just 13 minutes of action, failed to alter the momentum of the game.

Indeed, a dominant Meath side rounded off the game in style when a flowing move deep into added-time saw sub Daniel O’Neill slap the ball to the net from close range to wrap up an easy win.

Meath will now be favourites to overcome Longford on May 27th in their Leinster quarter-final, while Westmeath will be hoping that talisman John Heslin will have recovered in time for their last-eight joust with Laois a day earlier.

Fiji wrap up Covid-hit campaign with a win over Georgia 14:32
Antoine Rozner pips Andy Sullivan in Dubai smash and grab 12:54
Wallabies fall short as they draw with Argentina in the rain 11:38
Emiliano Grillo storms into the lead in Mexico 08:36
Jim McGuinness: Cavan need illogical courage and variety to down the Dubs 07:00