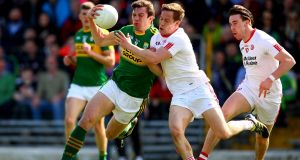 David Moran: one of five Kerry players to have started every game in the league this season. Photograph: Cathal Noonan/Inpho

Try telling it to a Kerry supporter with Dublin on the horizon this weekend but whatever happens in the Allianz Football League final, spring has been a success for the Kingdom.

The Munster champions have used the most players of any team in the division during the seven group games, 34, as they seek to blood new talent and find different ways of challenging Dublin’s dominance.

Even Dublin, for all the talk of their remarkable squad depth, have only used 31 players across those seven games.

Mind you, if any other county comes even close to matching the amount of players that have played competitively for Dublin since the start of the pre-season competitions, a whopping 52, it would be a surprise.

Barry has started five of Kerry’s seven games and was described by ex-Kerry midfielder Michael Quirke as ‘the find of the league for Kerry already, after just a game and a half’

Necessity has been the mother of invention in Kerry’s case and after coming up consistently shy of Dublin in recent seasons – they have lost 10 of their last 13 competitive encounters – Eamonn Fitzmaurice has been compelled to look to their supply line of talented young players to move things along.

That they have done so and still qualified for the final is an impressive feat, even if there was a little luck in how they edged out Donegal, Monaghan and Mayo to claim the second qualifying position.

Peter Crowley, David Moran, Tadhg Morley, Paul Murphy and Paul Geaney are the five players who have started every game.

Compared to Monaghan, who had eight ever-presents throughout their campaign and used just 27 players, a full seven less than Kerry, it is a high level of experimentation.

Fitzmaurice clearly needs fresh options to overcome Dublin and in Jack Barry he may just have found a rough diamond in the middle third of the field where mobility is a vital asset.

Barry has started five of Kerry’s seven games, featuring in them all, and was described by ex-Kerry midfielder Michael Quirke as far back as February as ‘the find of the league for Kerry already, after just a game and a half’.

In just his first full league campaign, attacker Jack Savage has been a virtual ever-present too, only failing to start their final game, against Tyrone, last weekend.

Defender Ronan Shanahan has clocked up the same amount of starts, six, with Kevin McCarthy missing the ties against Donegal and Mayo but starting the rest. Conor Keane, Conor Geaney, Tom O’Sullivan, Jason Foley and Adrian Spillane have all started matches too while Denis Daly came on against Tyrone, lending Fitzmaurice another interesting option.

Whether he opts for youth, experience or, most likely, a mixture of the two, when they meet Dublin this weekend will be riveting, as will be their tactics in the face of growing commentary about their apparent conservatism.

For the record, Dublin and Cavan had the highest level of experimentation after Kerry in this year’s Division One campaign, fielding 31 different players each.

It’s the second season in a row that Monaghan, who have the lowest population of any county in the division, have used only 27 players.

It represents continued excellent management on Malachy O’Rourke’s behalf and but for a late fade-out against Dublin in Clones last Sunday they could very well have qualified for the final despite those meagre resources.

Dublin’s numbers will be swelled on Sunday if, as expected, Con O’Callaghan plays some role for the four-in-a-row league champions.

The All-Ireland club hurling medal winner returned to the Dublin match-day squad in Clones wearing the number 25 jersey though he wasn’t used.

The other members of last weekend’s 26 that togged out in Clones, and also against Roscommon, that are still waiting on game time in this year’s campaign are sub goalkeeper Evan Comerford and Robbie McDaid.