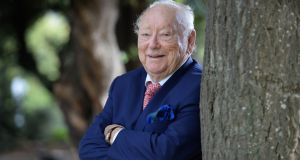 The death has taken place of former Dublin football captain Denis Mahony. He passed away on Monday night at the age of 88. From the St Vincents club, he was part of a historic generation of footballers – the first exclusively born and bred in the county to represent Dublin.

He also went on to chair the county board immediately after his playing career ended.

Danno Mahony led Dublin out in one of the most famous All-Irelands of all time, the 1955 final against Kerry, which attracted a then record crowd of 87, 102. Backboned by Vincents’ players, including Kevin Heffernan at full forward, the team had destroyed the reigning champions Meath in Leinster and were favourites to beat Kerry.

Playing an innovative brand of football with Heffernan as a roving attacker, Dublin were presented as the modern force in the game as opposed to Kerry’s more traditional tactics, as advocated by their legendary manager Dr Eamonn O’Sullivan.

In the end tradition won the day but the scale of the disappointment drove Heffernan in his quest for All-Ireland success in the 1970s as Dublin manager.

He wasn’t the only one devastated. “We all were,” said Mahony in an interview in this newspaper in 2015, the 60th anniversary of his All-Ireland final appearance.

“I had to go to the back of the Cusack Stand to congratulate the Kerry team and I came out crying. You put so much into it and you know . . . that’s sport.”

He was an influential personality in the team he captained – a terrific defender, a hard marker with a well-judged taste for adventure.

“Danno Mahony, a fine leader, is a tireless worker and can afford to come up and help his half-backs on demand,” wrote PD Mehigan in these pages of the Dublin corner back.

“I roamed a bit but Peter O’Reilly (Dublin trainer in the 1950s) kept me in the bloody corner!” remembered the player himself.

As part of his pioneering generation he won All-Ireland minor honours in 1945 and lost the following year’s final (inevitably, against Kerry) and was one of the 14 St Vincents players to line out for Dublin in the 1953 NFL final against then All-Ireland champions Cavan.

The team didn’t win Leinster until 1955 and again in 1958 when they went on to win the All-Ireland. By then Danno had retired. He recalled getting in first with the request not to be further considered but noting that no-one protested.

He remained involved with the county board as chair for a few years before his hugely successful business life took over in the 1960s.