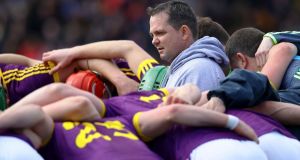 For Davy Fitzgerald Sunday was the second year running that he’d put paid to Kilkenny in the knockout stages of the league. Twelve months ago his Clare team went on to win the competition for the first time in 38 years but the championship proved a damp squib.

The league might not have been enough to convince all concerned that Fitzgerald’s stewardship should continue but at least a national trophy was on the mantelpiece even if his 2013 coup in the All-Ireland had refined tastes in the county.

This year the former Clare goalkeeper has transformed Wexford and tasked with a three-year plan to get them back to the top flight, Fitzgerald has completed the job in less than two months.

Full forward Conor McDonald says that the manager has liberated the players.

“It’s hard to put your finger on it really. I think he asks us to be so honest and give everything we have – it gives us that freedom to go and express ourselves. I think you could probably see that in our play. Quite often the scores we get, it’s really expressing yourself and believing you can mix it with the best.”

A top-quality side in Kilkenny and it’s nice to come out on the right side of it, it’s not often it happens especially up here. Yeah it’s nice

Wexford have a lot to do if they are to emulate Clare but those in the county with long memories will know that the league can sometimes be a springboard to remarkable things.

Ten years ago the county reached the semi-finals by defeating Galway for the first time in 17 seasons and if the outcome was a sobering reality check with a Kilkenny team then in their pomp, the previous decade offers more encouraging portents.

In 1996 Martin Storey reckoned that he hadn’t been on a team that had defeated Offaly since 1987. In the league quarter-finals 21 years ago, Wexford were taking on the county that had won the All-Ireland two years previously and been in the following season’s final.

The victory in Thurles was slightly overshadowed when Laois, managed by Babs Keating, defeated Kilkenny in the other quarter-final but Wexford’s progress was still a coup. Galway beat them comfortably in the semi-finals but the seed had taken root and three months later Liam Griffin’s team were overturning the league result in an All-Ireland semi-final on the way to the county’s only All-Ireland title in the past 49 years.

Reading significance into such things would probably bring Fitzgerald out in a rash but Wexford beating Kilkenny remains a landmark achievement, something the county hadn’t done in a major competition for 13 seasons and something that hadn’t been done in Nowlan Park for 57 years.

McDonald, for a couple of years Wexford’s go-to forward, was aware of the significance after a vibrant display in which he managed four points from play to match his haul from frees.

“A top-quality side in Kilkenny and it’s nice to come out on the right side of it, it’s not often it happens especially up here. Yeah it’s nice.”

The semi-final involves a return to Nowlan Park to face another serious test.

“Tipp are All-Ireland champions, you know what I mean,” he says. “They’ve quality, depth in their panel like Dublin in the football. They bring on a fella and he could have so many Munsters and All-Irelands and All Stars. That’s what you’d be hoping to mix with and you can’t really do that unless you’re there. So that’s where we’re aiming to be and we’re there now so we can just go again and see what happens.”