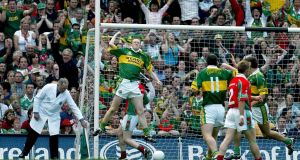 In the 25th minute of the final, with Kerry four ahead, current Kerry manager Eamonn Fitzmaurice hits a long ball, which Cooper takes perfectly over Pat Kelly’s head before turning him and arcing around the covering Gary Ruane and tucking a goal into the net. It is his first All-Ireland medal.

Within 17 minutes he had fired over four points, the second a spectacular left-foot shot from tight in the right corner. He finished with five, as Kerry sailed home, and won the man of the match award. “I’m not the first person to say it but this is a great man,” said manager Jack O’Connor afterwards.

Unusually Dublin were favourites. Manager Pat Gilroy later memorably described his team as “startled earwigs”. The startling began early. Cooper glided in after Mike McCarthy’s blistering exchange with Darran O’Sullivan, swivelled onto his left and steered the ball into the net. Fewer than 40 seconds were on the clock.

In the 12th minute Cooper played a 1-2 from a free, drew two defenders and then dummied a kick pass. (In these pages Malachy Clerkin said it looked like Torc Waterfall pausing midstream.) Spotting Donnchadh Walsh’s run, he picked him out instead and one pass later to James O’Donoghue – goal.

The one remaining medal that he really wanted. Slaughtneil hadn’t conceded a championship goal for two years when Daithí Casey’s driving 20th-minute run from 70 metres allowed Cooper ghost in behind the defence, take the pass and slide the ball into the net to get Crokes back into the match.