Philly McMahon: If Kerry need to mix it to win, so be it 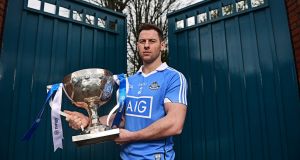 Dublin’s Philly McMahon: “We know that we can’t stop; we’re going to play right until the end”. Photograph: Ramsey Cardy/Sportsfile

In a way it’s an obvious attitude. Otherwise Dublin wouldn’t have established such a track record of resisting defeat. On Sunday in Clones many in the large attendance and even some in the press box were coming to the conclusion that Monaghan were about to end the record.

Leading their visitors by six points as the third quarter, Malachy O’Rourke’s team had looked sufficiently parsimonious at the back to make that margin last until full-time.

So despite the abundant evidence of the All-Ireland champions’ powers of recovery, it looked as if they would be starting their next match with the 35-match unbeaten slate wiped clean. Those in a position to influence the outcome naturally saw things in a different light.

“We know that we can’t stop; we’re going to play right until the end. We played Monaghan on Sunday and when they scored the goal, you have players running up into your face celebrating and you think: ‘hold on a second, they think this game is over.’

“And they’re probably thinking in their head, ‘when is this going to be over?’ For us, it’s not. We nearly want the ref to play ten minutes more. Whether we’re winning comfortably or it’s a tight game, that’s the way I look at it.”

The inexorable progress continues. Next Sunday, in pursuit of a fifth successive league title Dublin play Kerry in a repeat of last year’s spring climax, which saw McMahon and his team comfortable winners.

The match will come just three weeks after the over-wrought divisional meeting of the counties in Tralee, punctuated by off-the-ball fouling and yellow cards and decided by Paul Mannion’s late equalising point, which meant that Dublin had equalled the 84-year old record unbeaten run of Kerry.

It was highly charged stuff and set quite an agenda for the counties’ next meeting, which has materialised unexpectedly soon after Eamonn Fitzmaurice’s team vaulted into second place in the Division One table on the closing afternoon of the regulation league.

Unsurprisingly McMahon plays a straight bat on the implications of what happened in the flickering shadows cast by the Stack Park floodlights.

“There was a lot of talk after it. I was surprised by it. What are you expecting?! We’re playing Kerry down in Tralee. There’s talk and hype about this unbeaten run. The Dublin fans all travel. The atmosphere was electric. Kerry got a good start and there’s always going to be that physicality.

“They were certainly more physical in the last game in Tralee. There was certainly more pulling and dragging on both teams, so this is – as I said – it’s probably not the orthodox way Kerry are known for, but if that’s the way they have to play to win games, that’s up to them.”

He probably knew that his former club manager Paul Curran would crop up. The Dublin All-Ireland medallist and 1995 Footballer of the Year said last week in his Evening Herald column that Kerry “should be ashamed of themselves” for the Tralee display. He may or may not have anticipated the counties re-acquainting this quickly.

“Hmm. That’s Paul’s opinion,” said McMahon. “My opinion on the way Kerry played in Tralee: that’s what they had to do and it’s down to me to judge that, I’m a player; it’s down to the officials to police that and that’s it. Why would you be ashamed to win a game and what way you try to win is irrelevant?”

Was the intensified physicality of the match three weeks ago further evidence that the long, barren spell against Dublin – an unparalleled four successive defeats in championship and two years since the only league win in the last five – is beginning to get to Kerry?

“It could be; I don’t know. You’d have to ask Kerry that but there was certainly a bit of off the ball stuff but again, that’s why the game is so exciting . . . like I don’t commend off-the-ball stuff but so what – let’s get on with it. If it’s something that’s really bad then let the officials deal with it but let the two of us go at it and see who comes out the victors.”

He does accept that for teams to develop specific strategies to counter Dublin is in its own way a compliment of sorts.

“It possibly means that they are thinking a little bit more about you than they are about themselves. I don’t know, we’ve never set out to do that so I’ve never experienced it. As a collective have we went out to contain teams? I’d be lying if I said we weren’t working on certain things like that but it certainly wouldn’t have been to that extent.”