Kerry’s Donnchadh Walsh is a man in scoring form 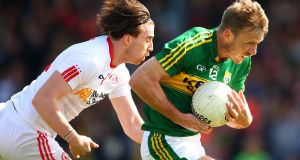 Donnchadh Walsh’s inspired six points against Tyrone on Sunday materially altered Kerry’s season, helping to take the Munster champions from sixth place in Division One all the way to second and with that into next weekend’s final against Dublin.

Walsh scored a goal in each of his first two league finals in 2008 and ‘09, both against Derry, and will be hoping to resume that scoring form rather than the more meagre return of a point in last year’s final thrashing by Dublin. His scoring exploits in Killarney mean he goes into the match in form.

It is the latest of the Dublin-Kerry match-ups at Croke Park, none of which have gone the latter’s way since the league encounter of more than five years ago. Most recently, three weeks ago in Tralee, Walsh and his team-mates had a glorious opportunity to puncture the All-Ireland champions’ now record unbeaten run but conceded a late equaliser.

“We were very disappointed in the immediate aftermath of that game that we didn’t see it out, and then, looking back on it again, we said there were a lot of positives to be taken from it.”

Having put in an aggressive shift during a scrappy and bad-tempered 70 minutes, Walsh says that they were equally disappointed with the inability to follow the draw with an equally convincing performance in the next fixture.

“That meant we put ourselves under pressure on Sunday, which was a bit annoying, but now we have another chance against Dublin, in Croke Park again. We want to pit ourselves against the best and Dublin are the best at the moment.

“It’s going to be a totally different game, playing on a Sunday afternoon in Croke Park compared to Saturday night under lights in Austin Stack Park. Completely different scenario, and there might be changes to both teams.”

If it was an unexpected development for Kerry to make the final, for a team road-testing some of the exceptional younger talent in the county a national final on Jones’s Road it’s also a great opportunity.